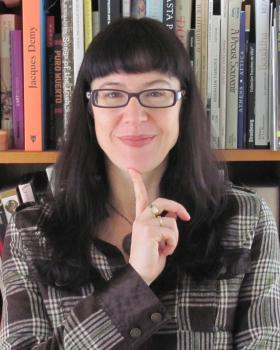 We could not be more excited to announce our new series editor: Professor Anne E. Duggan. Anne has been a valued member of Wayne State University, WSU Press, and of the fairy-tale studies community for many years, including serving previous terms on WSU Press's faculty Editorial Board. We are excited to work closely with her and to see the new directions that the Series will go with Anne at the helm.

In Anne's own words:

"I am most honored to serve as the second series editor of The Donald Haase Series in Fairy-Tale Studies at Wayne State University Press. I had the privilege of working with Don over the years, first as the associate editor of Marvels & Tales, then as a member of the Advisory Board for the Series. We later collaborated on the second revised and expanded edition of The Greenwood Encyclopedia of Folktale and Fairy Tales under the title Folktales and Fairy Tales: Traditions and Texts from around the World (2016). Under Don’s guidance as series editor I also published Queer Enchantments: The Fairy-Tale Cinema of Jacques Demy (Wayne State University Press, 2013), which had the good fortune of being translated into French as Enchantements désenchantés: les contes queer de Jacques Demy (2015), and which continues to receive critical attention in France.

As coeditor of Marvels & Tales with Cristina Bacchilega and as the general editor of the forthcoming 6-volume A Cultural History of Fairy Tales, I have very much enjoyed working with authors and other editors to produce innovative and high quality scholarship in fairy-tale studies, and I will bring this expertise with me as series editor. I plan to continue Don’s excellent work by seeking out new, cutting-edge studies and expanding the series’ geographical coverage, attracting both seasoned fairy-tale scholars and new scholars to Wayne State University Press.

I am thrilled to be taking on this role and very much look forward to working closely with the wonderful staff at WSU Press, the Series’ advisory board, and of course, current and future authors in fairy-tale studies, continuing the tradition of scholarly excellence the Series represents."

14 hours 12 min ago
DETROIT BOOK OF THE DAY: DAY 1 THE DETROIT SYMPHONY ORCHESTRA details the history of the @DetroitSymphony as seen… https://t.co/7zpUnVRwiw
1 day 8 hours ago
In honor of the #CityofDetroit turning 321 years old on July 24th, WSUPress will be showcasing one Detroit Book of… https://t.co/PA7nONh4C0
1 day 13 hours ago
OUR FALL & WINTER 2022 TITLES ARE NOW AVAILABLE FOR PRE-ORDER! Grab your copy of any of our fall & winter titles f… https://t.co/qDykAsF9sk