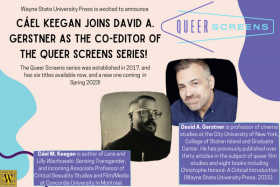 We are so happy to announce that Cáel Keegan has joined David Gerstner as the new co-editor of our Queer Screens series!

Queer Screens expands our senses by reimagining the relationship between queerness and the screen. In short, it engages in theoretical mayhem. Embracing mayhem’s destructive and reconstructive energies, each book in the series opens the “queer screen” to new questions about method, content, and form. Through rigorous textual analysis, Queer Screens refuses to let queerness rest or settle; it presses queer up against considerations of transness, race, and class analyses. Probing the edges of both queerness and the screen, the series provokes unexpected theorizations of visuality, aesthetics, mediation, canonicity, cinephilia, and auteurism.

Check out the books in the series here!

22 hours 14 min ago
Today is #smallbusinesssaturday! Make a stop into your favorite local business or #indiebookstore, and get started… https://t.co/yddIwk9cIF
1 day 22 hours ago
Our holiday sale is officially here! Starting TODAY, take 30% off ALL BOOKS with code HOL2 at… https://t.co/s5Dp8iGvDg
3 days 15 hours ago
@upfromsumdirt We are very excited to work with you on this collection!