Made in Michigan Writers Series Bus Tour - May 17-18 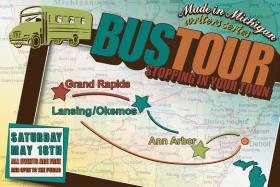 On Friday, May 17 and Saturday, May 18, 2013 a group of WSU Press's Made in Michigan Writers Series authors are embarking on a literary voyage across the state! The Made in Michigan Writers Bus Tour will celebrate a new season of titles and a new partnership with The Meijer Foundation. Stops in Detroit, Ann Arbor, Lansing, and Grand Rapids will feature a diverse group of authors and an exciting variety of programming. The bus will carry the authors to each partner venue where they will mingle, speak, and sign books—and then it's off to the next stop!

Kick off the weekend with us on Friday, May 17 at the Books & Beer Backyard Bash at the Old Miami in Midtown Detroit. This festive evening of readings, music, food, and drink will launch the bus tour and also serve as the annual celebration of new titles in the Made in Michigan Writers Series. Featuring authors Chris Dombrowski, Jack Ridl, Ron Riekki, and Gloria Whelan.

On Saturday, May 18 the bus tour takes off for Ann Arbor, with a fun and interactive "Mad Libs" Poetry Session at 11:30 am at the Ann Arbor District Library. Featuring poets Chris Dombrowski, francine j. harris, M.L. Liebler, Jack Ridl, and Keith Taylor.

The tour culminates in Grand Rapids at 6:30 pm with "An Evening with the Made in Michigan Writers Series" at the Grand Rapids Public Museum - Meijer Theater and Lobby. Featuring keynote readings by authors Bonnie Jo Campbell and Gloria Whelan.

Throughout the tour, the bus will be parked prominently outside of each venue, serving as a giant mobile billboard for WSU Press, Wayne State, and the Made in Michigan Writers Series.

All events are free & open to the public (although some ask for a modest suggested donation). Follow us on twitter and facebook and watch the hashtags #MichLit and #BooksBus for all the action!

Thank you to our Made In Michigan Writers Series Bus Tour sponsors:

2 hours 55 min ago
Wayne State University President M. Roy Wilson with his teacher in high school. Check out this image and many more… https://t.co/W3kp1D7dFX
1 day 2 hours ago
HAPPY PUB DATE! Dan Gerber said "If you make yourself available to Cindy Hunter Morgan’s poems, they will revivif… https://t.co/L60dTqsUUj
1 day 22 hours ago
Grab your copy or e-book of @fkwang's YOU CANNOT RESIST ME WHEN MY HAIR IS IN BRAIDS today! https://t.co/htFDjNa9yj https://t.co/zHyt049441