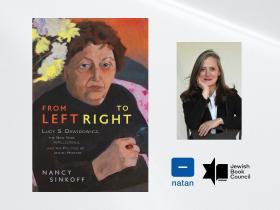 Wayne State University Press is thrilled to announce that Natan and the Jewish Book Council have named Nancy Sinkoff's From Left to Right: Lucy S. Dawidowicz, the New York Intellectuals, and Politics of Jewish History the Fall 2020 Natan Notable Book!

"Twice a year, Natan Notable Books recognizes recently-published or soon-to-be-published non-fiction books that promise to catalyze conversations aligned with the themes of Natan's grantmaking: reinventing Jewish life and community for the twenty-first century, shifting notions of individual and collective Jewish identity, the history and future of Israel, understanding and confronting contemporary forms of antisemitism, and the evolving relationship between Israel and world Jewry.

In making the Fall 2020 selection, Natan is recognizing not only Professor Sinkoff's work of wide-ranging, diligent historical scholarship, which emanates form a deep understanding of a century of Jewish history in America and Eastern Europe; but also the life, work and intellectual contributions of an under-appreciated and nearly-forgotten historian and public intellectual, Lucy S. Dawidowicz (1915-1990).

The Natan Notable Books committee is proud to shine a spotlight on Dawidowicz's steadfastness, mental acuity, practical intelligence, and courage in expressing forthright, controversial -- yet highly educated and researched -- views. As Sinkoff so brilliantly documents, Dawidowicz's experiences, scholarship, and political evolution not only illuminate the critical issues of 20th century Jewish life, but they also offer guidance for navigating our own complicated times as Jews in America in the 21st century."

For the full announcement, visit https://www.jewishbookcouncil.org/pb-daily/announcing-the-natan-notable-books-fall-2020-winner

Nancy Sinkoff is the academic director of the Allen and Joan Bildner Center for the Study of Jewish Life and professor of Jewish studies and history at Rutgers University-New Brunswick. She is author of Out of the Shtetl: Making Jews Modern in the Polish Borderlands, of "Yidishkayt and the Making of Lucy S. Dawidowicz" the introductory essay to Dawidowicz's reissued From that Place and Time, A Memoir, 1938-1947, and co-editor with Rebecca Cypess of Sara Levy's World: Gender, Judaism, and the Bach Tradition in Enlightenment Berlin, winner of the 2019 book prize from the Jewish Studies and Music Study Group of the American Musicological Society.