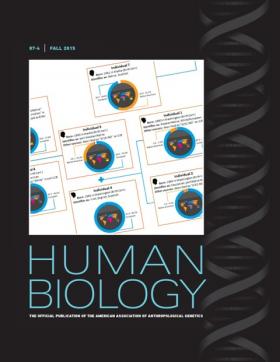 Wayne State University Press and the editors of Human Biology are pleased to announce the publication of the latest issue of the journal, a special issue titled “The Genetic Anthropologist’s Contribution to Understanding Race and Racial Health Disparities.”

The guest editors are Abigail W. Bigham (University of Michigan), past president of the American Association of Anthropological Genetics (AAAG), and Amy Non (University of California, San Diego). This issue is the product of a symposium hosted by the AAAG at the 2015 meeting of the American Association of Physical Anthropologists. The symposium, “Rethinking Racial Health Disparities: the genetic anthropologist’s contribution to debates over health inequalities,” launched research resulting in articles on the following subjects:

• Genetic variation underlying complex phenotypic traits is more complex than previously imagined;
• The persistence of dangerous misconceptions about race in medicine, in the classroom, and in research; and
• The value of integrating ethnographic research into biological studies of population health.

Genetic anthropologists are well-positioned to integrate genetic, biological, and sociocultural data to broaden conceptualizations of human diversity and identity, improve medical and undergraduate education, and fundamentally advance our understanding of racial health disparities.

The journal is available directly from Wayne State University Press, and to subscribers of BioOne, JSTOR, and Project MUSE.

About Human Biology: Founded in 1929, Human Biology is an international, peer-reviewed journal that focuses on research to increase understanding of human biological variation. Among the topics considered by the journal are anthropological, quantitative, evolutionary, and population genetics and genomics; ancient DNA studies and paleogenomics; demography and genetic epidemiology; and ethical and social implications of human genetic and genomic research.

Human Biology is the official publication of the American Association of Anthropological Genetics (AAAG), an educational and scientific organization founded in 1994.