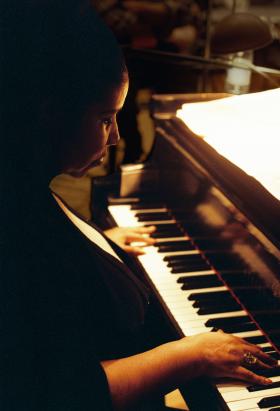 DPTV airs documentary of her greatest television performances, along with a guest appearance by local photographer whose book captures an intimate portrait of the Queen of Soul
Watch Friday, March 6, at 9 p.m. on DPTV (56.1)

With the documentary, “Aretha Franklin Remembered,” Detroit Public TV celebrates the legendary Queen of Soul and the first woman inducted into the Rock & Roll Hall of Fame with her greatest hits from television appearances spanning the 1960s-2000s. Many of these performances have never been seen in the U.S. DPTV will be airing this special tribute on Friday, March 6, at 9 p.m.

Joining hosts Fred Nahhat and Lisa Hall live in the studio will be members of the Franklin family and Linda Solomon, famed Detroit photographer, who will discuss her latest book, The Queen Next Door: Aretha Franklin, An Intimate Portrait (Wayne State University Press). Published late last year, the book is full of firsts as Solomon was invited not only to capture historic events in Aretha's music career but to share the Franklin family's most intimate and cherished moments in her beloved hometown of Detroit.

Viewers pledging $84 (or $12 a month as a sustainer) to DPTV that evening will receive a copy of this inspiring book, along with an Aretha Franklin-inspired tote bag, designed and produced by Cristal Franklin, Aretha Franklin’s niece.