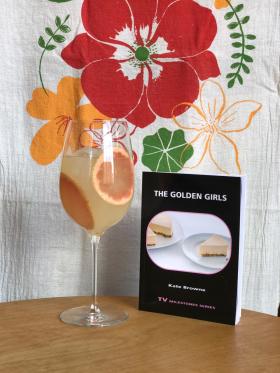 Each week, WSU Press will be pairing our books with the insanely beautiful drink creations of Gates Otsuji, founder of Controlled Substances, a bar and beverage consultancy based in Brooklyn.

This week we have the St. Olaf Spritz and The Golden Girls.

THE INSPIRATION
The characters of The Golden Girls are entertainment icons and Kate Browne’s book does an excellent job of exploring how and why they achieved such lasting success in our cultural memory.  It’s impossible to pick a favorite because we see ourselves in each one of them at different times in our lives. It seems only fitting that a cocktail tribute to The Golden Girls should be one with a flexible recipe, which you can modify to suit your mood. One of the beauties of the spritz structure is that it’s very forgiving and you can adjust it to fit your tastes, so don’t be afraid to have fun with this recipe.

Grapefruit Vodka
1. Place a couple sprigs of fresh thyme in a clean quart or liter jar. Follow with about ¼ tsp of whole peppercorns (black is fine, but you can also use Szechuan, pink, or Sansho).
2. Measure out a rounded ½ teaspoon of white sugar. Slice a small, ruby red grapefruit into wheels and discard the ends. Sprinkle the sugar onto each grapefruit slice, so that the sugar is sandwiched between the wheels. Add the grapefruit wheels to the jar. (Extra credit: add a few pieces of gentian root to give a drying quality to the infusion.)
3. Pour a 750 ml bottle of vodka into the jar, saving the original bottle & cap.
4. Seal the jar and swirl it to coat the solids. Place it out of direct sunlight for three hours, shaking occasionally to keep the fruit and herbs submerged in the vodka as much as possible.
5. After three hours, move the jar to the refrigerator for between two to six days, shaking occasionally.
6. Strain the mixture through a sieve lined with a coffee filter to remove the fruit and herbs, reserving the liquid in another large jar or bowl with spout. Discard solids. Then use a funnel to return the infused vodka back into its original bottle.

Grapefruit Cordial
1. Slice a small, ruby red grapefruit into wheels and place in a jar or zip-top bag.
2. Measure out 8oz (225g) of white sugar and use some of the sugar to thoroughly coat the wheels.
3. Add a couple sprigs of fresh thyme (necessary) and cracked green cardamom pods (optional) and pour the remaining sugar over everything. And seal (if using a zip-top bag, let out as much air as possible).
4. Let the mixture rest at room temperature until the sugar has liquefied, shaking occasionally.
5. Once the sugar has dissolved, add 8oz (300ml) water, re-seal, and shake. Rest the mixture in the refrigerator overnight.
6. Strain the mixture through a sieve to remove the fruit, reserving the liquid in another large jar or bowl with spout. Discard solids. Pour cordial into sealable container. (Pro tip: If you won’t be using it right away, you can extend the shelf life of the cordial by adding a half ounce of vodka to it.)

St. Olaf Spritz
Before making this drink, ask yourself: “Which Golden Girl am I today?” and follow these instructions accordingly, adding all ingredients to an ice-filled wine glass, then stirring briefly to mix.  Garnish with thinly-sliced grapefruit wheels.

THE MIXOLOGIST
Gates Otsuji is the founder of Controlled Substances, a bar and beverage consultancy based in Brooklyn, with more than two decades of experience creating cocktail programs for brands like The Standard, Starr Restaurants, and The Edition. As a third-generation Detroiter, Gates is thrilled to partner with WSU Press for this series.

THE BOOK
The Golden Girls made its prime-time debut in 1985 on NBC, and the critically acclaimed show has been a constant television companion through cable reruns and streaming media services ever since. Most people know that The Golden Girls is a sitcom about four feisty, older women living together in Miami who love to eat cheesecake, but Kate Browne argues that The Golden Girls is about so much more. Drawing on feminist literary studies and television studies, Browne makes a case for The Golden Girls as a TV milestone not only because it remains one of the most popular sitcoms in television history but also because its characters reflect shifting complexities of gender, age, and economic status for women in the late twentieth century and beyond.