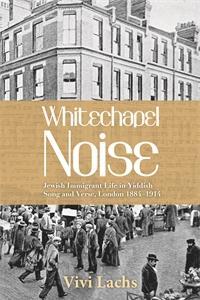 VIvi Lachs, author of Whitechapel Noise: Jewish immigrant life in Yiddish song and verse, London 1884-1914, will be touring North America this fall! All talks are in English unless stated that they are in Yiddish.

ACADEMIC TALKS (OPEN TO THE PUBLIC)

Title of talk: Whitechapel Noise: Sex, politics and religion on the streets of London’s East End 1884-1914

Description: The kupletn (couplets) of pre-first world war London were penned by the famous and the unknown, and tell tales of an immigrant culture in flux. Morris Winchevsky’s poetry pushes revolutionary ideas and union activism. Music-hall songs display the changing nature of sexual relationships, marital disharmony, and abuse. Satirical verse pinpoints how immigrants grappled with modernising religious practice. And the texts tell these stories with humour, intensity, and passion.

Title of talk: Nudge, Wink in Whitechapel: Secret histories from the lyrics of the Cockney-Yiddish Music hall at the turn of the Twentieth Century

Description: From the late 1890s a vibrant Yiddish music hall developed in the East-End of London. Immigrant writers and performers wrote heartfelt, moving, and humorous songs about their experiences of changing times, and in true music hall style, with cheeky innuendo alluding to sexual contact. This talk will analyze and perform songs which engage with the changing roles of men and women, sex in and out of marriage, and the community's 'dirty linen', sexual abuse and prostitution.

Description: Historical satire from the Yiddish press, rarely read today in Yiddish courses, is a treasure trove. It uncovers crevices of history, giving us particular insight into the detail of issues discussed in immigrant society. This talk will strip away the layers of a variety of funny and edgy poems and songs to uncover the detail of vital and angry debate in London's East End. Debates concerning wider-than-local issues of power in the community, shund and the Yiddish theatre, and increasing secularization. You'll never sing Ale Brider the same way again.

12 hours 13 min ago
RT @DarkProjections: Celebrating #Kolchak release day with an appearance on @richardsyrett’s Strange Planet. We talk all things NIGHT ST… https://t.co/96VJZhpsti
16 hours 43 min ago
RT @zoebossiere: So thrilled to announce a new anthology, THE LYRIC ESSAY AS RESISTANCE: TRUTH FROM THE MARGINS, w/ @ericatrabold av… https://t.co/LixsspYdKb
1 day 9 hours ago
Today marks the 4th anniversary of the passing of the Queen of Soul, Aretha Franklin. In THE QUEEN NEXT DOOR, phot… https://t.co/DbwToz8ff4