Announcing a new editor for Criticism 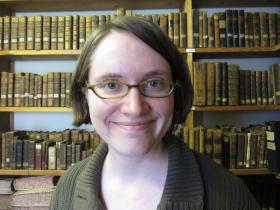 Wayne State University Press is pleased to announce that Jaime Goodrich has succeeded renée hoogland as editor of Criticism: A Quarterly for Literature and the Arts. Also joining us is Kelly Roy Polasek as the journal’s new managing editor.

Jaime Goodrich is an Associate Professor of English at Wayne State University. In addition to writing over a dozen articles and book chapters on early modern Englishwomen’s texts, she has published a monograph on the social and political functions of early modern Englishwomen’s devotional translations (Faithful Translators: Authorship, Gender, and Religion in Early Modern England, Northwestern University Press, 2014). She is currently editing works by early modern English nuns and writing a philosophically informed book on textual production and communal identity in English Benedictine convents on the Continent. Her favorite critical modes include feminism, historicism, history of the book, textual scholarship, and translation studies.

Polasek is a third-year doctoral student in the Literary and Cultural Studies program of the English Department at Wayne State University. Her research focuses on 20th- and 21st-century American literature with a special concentration on war literature.

Professor Goodrich’s five-year term as editor began in August. In this interview, she offers insight into her background, her plans as editor, and her vision for Criticism’s future.

Professor renée hoogland, the previous editor, invited me to become the reviews editor for Criticism in 2012. It was a great pleasure to work with her on the journal in that capacity, and I was delighted and honored to be chosen as Professor hoogland’s successor.

What excites you most about stepping into the role of editor?
Criticism is well-known for providing a forum for rigorous, critically informed scholarship that spans a diverse range of approaches, eras, and fields. For many in the wider scholarly world, the journal also serves as the public face of our English Department and Wayne State at large. I am excited about the challenges and rewards involved in running a flagship journal of this kind.

What new directions are you interested in exploring with the journal under your new editorship?
The journal has deservedly gained a reputation for its strengths in cultural studies, film and media studies, and queer theory. In addition to maintaining and building on those strengths, I would like to see Criticism become a place for meta conversations about the nature of scholarly criticism itself. I hope to begin a periodic series of special issues on emerging critical methodologies.

How do you see Criticism fitting into the current landscape of literary criticism?
As a generalist journal that publishes cutting-edge, methodologically driven articles, Criticism occupies a unique niche in the current landscape of literary criticism. No matter what their field, scholars can pick up an issue of Criticism and find something pertinent to their research. As cultural and literary theory continues to evolve, Criticism remains perennially relevant for literary scholars of all stripes.