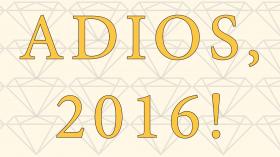 2016 has been an interesting year for all of us.

We’ve tackled some important challenges and celebrated from major triumphs.

And while we are eager to start a new year with an awesome list of books, let us not forget how far we’ve come this year, our 75th as Detroit’s premier scholarly publisher.

Things worth celebrating in 2016:

+The Meijer Foundation has approved an additional $500,000 grant to be paid over five years in support of the Made in Michigan Writers Series (more on this in 2017!)

+The Press received a $94,000 grant from a joint project between the Andrew W. Mellon Foundation and the National Endowment for the Humanities (NEH) to digitize 59 out-of-print titles

+We can now be found on Tumblr and Instagram

+Our books and authors received tons of very special awards

We’re setting big goals for ourselves and wishing for an even bigger and brighter 2017.

Thank you to everyone who has attended a WSU Press event, purchased our books, interacted with us or our authors in person or on social media, or just generally sent us good vibes this year. We are forever grateful to be a part of Detroit’s literary community.