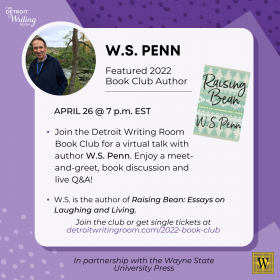 About the Book:
"Raising Bean" is a collection of narrative essays by W. S. Penn, a mixed-blood Native American writer. Penn’s essays are conversations with his granddaughter, who is lovingly referred to as "Bean," and now made available to a larger audience. Offered in the oral traditions of the Nez Perce, with satirical wit or a Native perspective on a range of ideas and events, Penn’s objective was to guide Bean toward adulthood while confronting society’s interest in possessions, fairness and status. Drawing on his own family history and Native mythology, Penn charts a way through life where each endeavor is a journey — an opportunity to love, to learn, or to interact — rather than the means to a prize at the end.

Divided into five parts, Penn addresses topics such as the power of words, race and identity, school and how to be. In the essay "In the Nick of Names," Penn takes an amused look at the words we use for people and how their power, real or imagined, can alter our perception of an entire group. "To Have and On Hold" is an essay about wanting to assimilate into a group but at the risk of losing a good bit of yourself. "A Harvest Moon" is a humorous anecdote about a Native grandfather visiting his granddaughter’s classroom and the absurdities of being a professional Indian. "Not Nobody" uses "Be All that You Can Be Week" at Bean’s school to reveal the lessons and advantages of being a "nobody." In "From Paper to Person," Penn imagines the joy that may come to Bean when she spends time with her Paper People — three-foot-tall drawings, mounted on stiff cardboard — and as she grows into a young woman like her mom, able to say she is a person who is happy with what she has and not sorry for what she doesn’t.

Comical and engaging, the essays in "Raising Bean" will appeal to readers of all backgrounds and interests, especially those with a curiosity in language, perception, humor and the ways in which Native people guide their families and friends with stories.

About the Author:
W.S. Penn is an emeritus professor from Michigan State University in creative writing. A past winner of the North American Indian Prose Award and the Stephen Crane Prize, he was a founder of the Wordcraft Circle of Native Writers and Storytellers with Lee Francis and others. He has published several novels, short stories and collections of essays of which "Raising Bean: Essays on Laughing and Living" is the most recent. Generally, he feels about his own writing the way a good cook may feel about his or her own cooking that, tasting it, he thinks, "I might have added a little of this or I might have reduced that," while he hopes his reader will still enjoy it. He continues to write, and being older than he ever thought he'd be, he does what all old men do — he golfs.

Essays on Laughing and Living

9 hours 2 min ago
Wayne State University Press is proud to announce our winner and finalists of the 2022 Next Generation Indie Book A… https://t.co/Ozy1WEQY1i
1 day 14 hours ago
Congratulations to all of the winners! https://t.co/Em8m5qoESk https://t.co/0EX9yD1vge
2 days 14 hours ago
RT @muckrack: Today's featured journalist is @fkwang, Communities Correspondent at @NewsHour. Based in Detroit, Frances covers As… https://t.co/XK9qCAOXhS