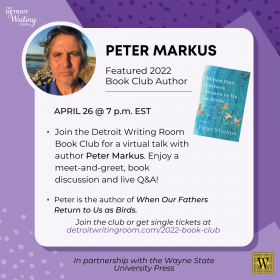 About the Book:
Over the course of two decades and six books, Peter Markus has been making fiction out of a lexicon shaped by the words brother and fish and mud. In an essay on Markus’s work, Brian Evenson writes, "If it’s not clear by now, Markus’s use of English is quite unique. It is instead a sort of ritual speech, an almost religious invocation in which words themselves, through repetition, acquire a magic or power that revives the simpler, blunter world of childhood." Now, in his debut book of poems, "When Our Fathers Return to Us as Birds," Markus tunes his eye and ear toward a new world, a world where father is the new brother, a world where the father’s slow dying and eventual death leads Markus, the son, to take a walk outside to "meet my shadow in the deepening shade."

In this collection, a son is simultaneously caring for his father, losing his father and finding his dead father in the trees and the water and the sky. He finds solace in the birds and in the river that runs between his house and his parents’ house, with its view of the shut-down steel mill on the river's other side, now in the process of being torn down. The book is steadily punctuated by this recurring sentence that the son wakes up to each day: My father is dying in a house across the river. The rhythmic and recursive nature to these poems places the reader right alongside the son as he navigates his journey of mourning.

These are poems written in conversation with the poems of Jack Gilbert, Linda Gregg, Jim Harrison, Jane Kenyon, Raymond Carver, Theodore Roethke too —npoets whose poems at times taught Markus how to speak. "In a dark time . . .," we often hear it said, "there are no words." But the truth is, there are always words. Sometimes our words are all we have to hold onto, to help us see through the darkened woods and muddy waters, times when the ear begins to listen, the eye begins to see, and the mouth, the body, and the heart, in chorus, begin to speak. Fans of Markus’s work and all of those who are caring for dying parents or grieving their loss will find comfort, kinship and appreciation in this honest and beautiful collection.

About the Author:
Peter Markus is the author of the novel "Bob, or Man on Boat," as well as the books of short fiction "We Make Mud" and "The Fish and the Not Fish," which was selected as a Michigan Notable Book in 2015. Other books include "Inside My Pencil: Teaching Poetry in Detroit Public Schools," about the work that Markus has been doing for the past two-and-a-half decades with InsideOut Literary Arts. Over the years he has published his work in such literary journals as Iowa Review, Chicago Review, Black Warrior Review, Massachusetts Review, Quarterly West, Alaska Quarterly Review, Willow Springs, Seattle Review, BOMB, Fairy Tale Review, Notre Dame Review, Kenyon Review, among others. In 2012 he was named a Kresge fellow in Literary Arts and in 2015 he received the Teaching Excellence Award from Oakland University where he's been teaching since 2013.

A luminous and heartfelt collection of mourning poetry.

5 hours 3 min ago
HAPPY PUB DATE! Dan Gerber said "If you make yourself available to Cindy Hunter Morgan’s poems, they will revivif… https://t.co/L60dTqsUUj
1 day 1 hour ago
Grab your copy or e-book of @fkwang's YOU CANNOT RESIST ME WHEN MY HAIR IS IN BRAIDS today! https://t.co/htFDjNa9yj https://t.co/zHyt049441
4 days 3 hours ago
Wayne State University Press is proud to announce our winner and finalists of the 2022 Next Generation Indie Book A… https://t.co/Ozy1WEQY1i