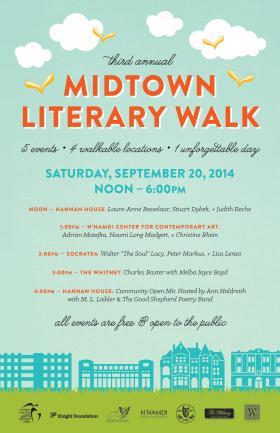 All Events are Free & Open to the Public

Enjoy a strolling afternoon of literary arts events hosted by venues in Detroit’s vibrant Midtown neighborhood. A range of authors – from poets to novelists to hip hop artists – will read and perform. Such talents include Charles Baxter, Stuart Dybek, Naomi Long Madgett, and many more. Books will be available for purchase by Book Beat. And be sure to stick around for our open mic event at Hannan House, where you can groove to some sweet jams. All events are free and open to the public. Metered street parking available.

Laure-Anne Bosselaar is the author of The Hour between Dog and Wolf and Small Gods of Grief, which won the Isabella Gardner Prize for Poetry. In 2007, Ausable Press published her third poetry collection, A New Hunger, which the American Library Association selected as a Notable Book for 2008.

Stuart Dybek has published three short story collections: Childhood and Other Neighborhoods, The Coast of Chicago, and I Sailed with Magellan; and two volumes of poetry: Brass Knuckles and Streets in Their Own Ink. He has been anthologized frequently and regularly appears in magazines such as The New Yorker, The Atlantic, Harper’s Magazine, and The Paris Review.

Judith Roche is the author of three collections of poetry, the most recent of which, Wisdom of the Body, won an American Book Award and was nominated for a Pushcart Prize. Judith currently teaches at Richard Hugo House in Seattle and for Jack Straw Productions and has taught poetry workshops throughout the country.

Adrian Matejka’s first collection of poems, The Devil’s Garden, won the 2002 New York / New England Award from Alice James Books. His second collection, Mixology, was a winner of the 2008 National Poetry Series and was published by Penguin Books in 2009. Mixology was a finalist for a NAACP Image Award for Outstanding Literature – Poetry. His most recent book, The Big Smoke, was awarded the 2014 Anisfield-Wolf Book Award. The Big Smoke was also finalist for the 2013 National Book Award and for the 2014 Pulitzer Prize in Poetry. He is a winner of the Julia Peterkin Award and recipient of two Illinois Arts Council Literary Awards and fellowships from the Guggenheim Foundation and the Lannan Foundation. His work has appeared in American Poetry Review, The Best American Poetry 2010, Gulf Coast, Ploughshares, Poetry, and Prairie Schooner among other journals and anthologies. He teaches in the MFA program at Indiana University in Bloomington and is currently working on a new collection of poems and a graphic novel.

Detroit Poet Laureate Naomi Long Madgett has been well recognized for her contributions as poet, publisher/editor, educator, and most recently the 2012 Kresge Eminent Artist Award. She is author of ten books of poems, the first published when she was only seventeen years old. Her early out-of-print books are now available from Michigan State University Press under the title Remembrances of Spring: Collected Early Poems. Among her most recent books of poems, all available from Lotus Press, Inc., are Octavia: Guthrie and Beyond and Connected Islands: New and Selected Poems. Her poems have appeared in numerous journals and 185 anthologies, both here and in Europe. Octavia and Other Poems was co-winner of the Creative Achievement Award (College Language Association) and was made required reading in all the public high schools in Detroit. It was also the basis of a documentary film, A Poet's Voice, which won the Gold Apple Award of Excellence from the National Educational Media Network. Naomi published her autobiography, Pilgrim Journey, in 2006. Dr. Madgett founded Lotus Press, Inc. in 1972 and continues to serve as publisher and editor.

Christine Rhein, formerly a mechanical engineer in the automotive industry, lives in Brighton, Michigan. Her poems have appeared in literary journals including The Gettysburg Review, Michigan Quarterly Review, and The Southern Review and have been selected for Poetry Daily, Verse Daily, Best New Poets, and The Writer's Almanac. Her first book, Wild Flight, won the 2008 Walt McDonald Poetry Prize.

Walter “The Soul” Lacy is a poet and hip hop artist, born and raised on Detroit's West side. He has opened for a range of artists, including Saul Williams, hip hop artist Freeway, and Detroit's own Dwele. He was a member of the 2009 U-Club Slam Team (for CUPSI) that competed at the University of Pennsylvania. He has poetry and hip hop projects in the works.

Peter Markus is the Senior Writer with the InsideOut Literary Arts Project. He is the author of the novel Bob, or Man on Boat, as well as five other books of fiction, the most recent of which is The Fish and the Not Fish. He was named a Kresge Arts in Detroit Fellow in Literary Arts in 2012.

Lisa Lenzo’s first story collection, Within the Lighted City, was chosen by Ann Beattie for the 1997 John Simmons Short Fiction Award and published by the University of Iowa Press. Lenzo’s other awards include a Hemingway Days Festival Award, a PEN Syndicated Fiction Project Award, and first prize for 2013 from Georgetown Review. Her stories and essays have appeared in Mississippi Review, Sacred Ground: Stories About Home, Fresh Water: Women Writing on the Great Lakes, and on NPR. Her newest collection is Strange Love, published by Wayne State University Press in 2014.

Melba Joyce Boyd is Distinguished Professor and Chair of Africana Studies at Wayne State University. She is the author of thirteen books, including Wrestling with the Muse: Dudley Randall and the Broadside Press, which received the 2005 Black Caucus of the American Library Association Book Honor for Nonfiction, and the editor of Roses and Revolutions: The Collected Writings of Dudley Randall (2009), which received the 2010 Library of Michigan Notable Books Award and was a finalist for a 2010 NAACP Image Award in Literature. Her 1994 book, Discarded Legacy: Politics and Poetics in the Life of Frances E. W. Harper, 1825-1911, was widely reviewed and praised by critics.

THE MIDTOWN LITERARY WALK IS SPONSORED BY

Complex, comical, and poignant linked stories about a mother and daughter’s attempts to find love.

2 hours 5 min ago
Wayne State University President M. Roy Wilson with his teacher in high school. Check out this image and many more… https://t.co/W3kp1D7dFX
1 day 2 hours ago
HAPPY PUB DATE! Dan Gerber said "If you make yourself available to Cindy Hunter Morgan’s poems, they will revivif… https://t.co/L60dTqsUUj
1 day 22 hours ago
Grab your copy or e-book of @fkwang's YOU CANNOT RESIST ME WHEN MY HAIR IS IN BRAIDS today! https://t.co/htFDjNa9yj https://t.co/zHyt049441