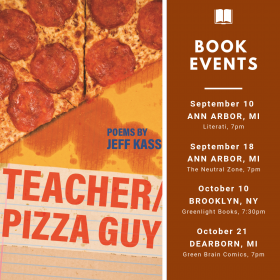 Greenlight Bookstore opened its doors at 686 Fulton Street in Fort Greene, Brooklyn in October 2009, and we're celebrating our 10th anniversary throughout the month of October 2019. Tonight's special event, hosted by three great friends of the bookstore, is a multi-part artistic feast in celebration of the many communities of which Greenlight is a part. Nelson George – novelist, music writer, filmmaker and longtime neighbor – screens a clip from his documentary film Brooklyn Boheme exploring the African-American arts movement in Fort Greene, and discusses the community in and of the neighborhood. Angel Nafis – poet, teacher and host of the Greenlight Poetry Salon – introduces performances by locally and nationally beloved poets, including Jeff Kass, and discusses what Greenlight has meant to writing communities in New York and beyond. Johnny Temple – publisher of Akashic Books and cofounder of the Brooklyn Book Festival – introduces readings from some special Akashic authors, including Marlon James, and discusses the community of independent and local publishers, nonprofits, and bookstores that make up Brooklyn's literary scene. Join us for an incomparable evening of art and celebration with some of our favorite neighbors!

Explores the emotional and physical labor necessary to work nights as a pizza delivery driver and days as a high school English teacher.

10 hours 30 min ago
RT @erikadreifus: Saddened by news of the passing of Steven Lowenstein (whose work informs my collection's opening poem). May his me… https://t.co/JVXTXMGfz7
10 hours 31 min ago
RT @SDJohnson515: @rebeccanagle @rinkuwrites @shondabuchanan Writer and author of BLACK INDIAN (@WSUPress) https://t.co/FWyBwXJQZ1
1 day 8 hours ago
"Invisible People: Stories of Lives at the Margin" by Alex Tizon, edited by Sam Howe Verhovek, Foreword by Jose Ant… https://t.co/dEtbZzoKX2