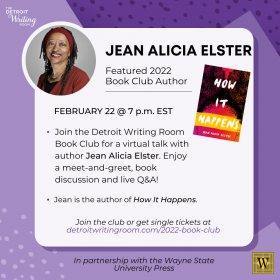 About "How it Happens":
"How It Happens" follows the story of author Jean Alicia Elster’s maternal grandmother, Dorothy May Jackson. Born in Tennessee in 1890, Dorothy May was the middle daughter of Addie Jackson, a married African-American housekeeper at one of the white boardinghouses in town, and Tom Mitchell, a commanding white attorney from a prominent family. Through three successive generations of African-American women, Elster intertwines the fictionalized adaptations of the defining periods and challenges — race relations, miscegenation, sexual assault and class divisions — in her family’s history.

A continuation of the plots begun in Elster’s two novels "Who’s Jim Hines?" and "The Colored Car," "How It Happens" continues the story for an older audience and begins with Addie’s life before the turn of the century in the South as a married Black woman with three biracial daughters navigating the relationship between her husband and Tom Mitchell. Later the story shifts to Addie’s daughter Dorothy May’s experiences both as a child and later, as a teacher who, choosing between her career and marriage to a man she barely knows, moves to Detroit. The story moves along with Dorothy May’s daughter Jean, who, with the support of her mother and the memory of her grandmother, confronts and comes to terms with her role in society and the options available to her as a college-educated Black woman in the post–World War II industrial North. While there is struggle and hardship for each of these women, they each build off one other and continue to demand space in the world in which they live.

Written for young adult readers, "How It Happens" carries the heart through the obstacles that still face women of color today and persists in holding open the door of communication between generations.

About the Author:
A 2017 Kresge artist fellow and a former attorney, Jean Alicia Elster is a professional writer of fiction for children and young adults. She is the great-granddaughter of Addie Jackson, whose family story is the basis of "How It Happens." Elster is the author of the Michigan Notable Books "Who’s Jim Hines?" (Wayne State University Press, 2008) and "The Colored Car" (Wayne State University Press, 2013).

Intergenerational story of three Black women and their struggle to stake their claim to the American dream.

4 hours 38 min ago
HAPPY PUB DATE! Dan Gerber said "If you make yourself available to Cindy Hunter Morgan’s poems, they will revivif… https://t.co/L60dTqsUUj
1 day 37 min ago
Grab your copy or e-book of @fkwang's YOU CANNOT RESIST ME WHEN MY HAIR IS IN BRAIDS today! https://t.co/htFDjNa9yj https://t.co/zHyt049441
4 days 3 hours ago
Wayne State University Press is proud to announce our winner and finalists of the 2022 Next Generation Indie Book A… https://t.co/Ozy1WEQY1i