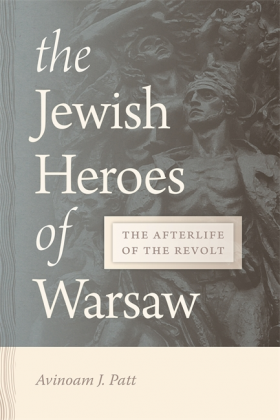 In this webinar,  Dr. Avinoam Patt will present his newest book The Jewish Heroes of Warsaw: The Afterlife of the Revolt. The expected publication date by Wayne State University Press is April 2021. Dr. Patt will examine how the heroic saga of the Warsaw Ghetto Uprising was mythologized in a way that captured the attention of Jews around the world, allowing them to imagine what it might have been like to be there, engaged in the struggle against the Nazi oppressor. Soon after the uprising in April 1943, the transition to memorialization and mourning of those lost in the Holocaust solidified the event as a date to remember both the heroes and the martyrs of Warsaw and of European Jewry more broadly. David Guzik, one of the JDC Directors in Warsaw, helped secure loans for the underground in the Warsaw Ghetto and contributed to documentation efforts after the revolt. JDC assisted the community after the war and played a role in early memorialization efforts.

Avinoam J. Patt (PhD,) is the Doris and Simon Konover Chair of Judaic Studies and Director of the Center for Judaic Studies and Contemporary Jewish Life at the University of Connecticut. He is the author of Finding Home and Homeland: Jewish Youth and Zionism in the Aftermath of the Holocaust (Wayne State University Press, May 2009); co-editor (with Michael Berkowitz) of a collected volume on Jewish Displaced Persons, titled We are Here: New Approaches to the Study of Jewish Displaced Persons in Postwar Germany (Wayne State University Press, 2010). He is co-editor of  The JDC at 100: A Century of Humanitarianism (Wayne StateUniversity Press, 2019). Together with David Slucki and Gabriel Finder, he is co-editor of a new volume Laughter After: Humor and the Holocaust (April 2020) and, with Laura Hilton, is co-editor of the new volume Understanding and Teaching the Holocaust (University of Wisconsin Press, July 2020).

This public lecture has been endowed by Jerry and Linda Spitzer in memory of his beloved aunt, Helen Cohen.

The event is co-sponsored by The Jewish Book Council

17 hours 38 min ago
More on the book here: https://t.co/4k5CJhQV6r
17 hours 39 min ago
🎵TAKE MY BREATH AWAY🎵 Thank you for this great piece, @juliehinds and @freep! Do not miss the virtual book launch… https://t.co/dY6hYjGOlt
17 hours 41 min ago
RT @j_o_rawlins: This Thursday I'll be joining Sean Redmond, @glendud, @VampireSorcha, Alex Wade, and Brenda Weber on zoom to talk T… https://t.co/6Rk4aRhwtX