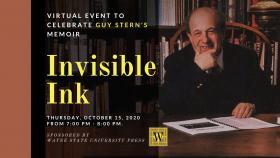 Join us for a virtual event to celebrate the launch of Guy Stern’s memoir, Invisible Ink!

Invisible Ink is the story of Guy Stern’s remarkable life. This is not a Holocaust memoir; however, Stern makes it clear that the horrors of the Holocaust and his remarkable escape from Nazi Germany created the central driving force for the rest of his life. During this virtual event, WSU Professor Emeritus Donald Haase and Guy Stern will join in conversation about this fascinating memoir. A special introduction will be given by newly appointed WSU Press Director, Stephanie Williams.

"Moving and unforgettable. Guy Stern’s telling of his epic journey through a well-lived life serves as a monument to the triumph of the human spirit."– Bruce Henderson, #1 New York Times bestselling author of Sons and Soldiers

GUY STERN is Distinguished Professor Emeritus in the Department of Classical and Modern Languages, Literatures, and Cultures at Wayne State University. He is currently director of the Harry and Wanda Zekelman International Institute of the Righteous at the Holocaust Memorial Center Zekelman Family Campus. He is the author of War, Weimar, and Literature: The Story of the Neue Merkur, Literature and Culture in Exile, and numerous scholarly papers.

Place your order for a first-edition copy including a custom book plate with Guy Stern's signature today for 30% off (use coupon code INK3 at checkout) and download a free chapter at www.wsupress.wayne.edu/books/detail/invisible-ink.

A Memoir by Guy Stern

The incredible autobiography of an exiled child during WWII.