How It Happens Virtual Launch Party 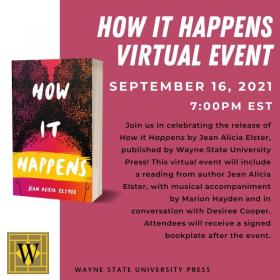 Join us in celebrating the release of How It Happens published by Wayne State University Press! This virtual event will include a reading from author Jean Alicia Elster, with musical accompaniment by Marion Hayden, an introduction by Press Director Stephanie Williams, and a moderated conversation with Desiree Cooper, author of Know the Mother (Wayne State University Press, 2016). Signed copies of the book will be available for purchase prior to the event via this link: https://www.wsupress.wayne.edu/books/detail/how-it-happens

How It Happens follows the fictionalized story of Elster’s maternal grandmother, Dorothy May Jackson. Born in Tennessee in 1890, Dorothy May was the middle daughter of Addie Jackson, a married African American housekeeper at one of the white boardinghouses in town, and Tom Mitchell, a commanding white attorney from a prominent family. Through three successive generations of African American women, Elster intertwines the adaptations of the defining periods and challenges—race relations, miscegenation, sexual assault, and class divisions—in her family’s history. How It Happens carries the heart through the obstacles that still face women of color today and succeeds in holding open the door of communication between generations.

A 2017 Kresge artist fellow and a former attorney, Jean Alicia Elster is a professional writer of fiction for children and young adults. She is the great-granddaughter of Addie Jackson, whose family story is the basis of How It Happens. Elster is the author of the Michigan Notable Books Who’s Jim Hines? (Wayne State University Press, 2008) and The Colored Car (Wayne State University Press, 2013).

Born in Detroit, MI, a crucible of jazz, Marion Hayden is one of the nation’s finest proponents of the acoustic bass. She is a co-founder of the touring jazz ensemble Straight Ahead- the first all-woman jazz ensemble signed to Atlantic Records. She is a member of the Detroit International Jazz Festival All-Star Ambassadors touring ensemble.

A 2015 Kresge Artist Fellow, Desiree Cooper is a former attorney, Pulitzer Prize–nominated journalist, and Detroit community activist. Her fiction and poetry have appeared in Callaloo, Detroit Noir, Best African American Fiction 2010, and Tidal Basin Review, among other online and print publications. Cooper was a founding board member of Cave Canem, a national residency for emerging black poets, and she is a Kimbilio fellow, a national residency for African American fiction writers.

Intergenerational story of three Black women and their struggle to stake their claim to the American dream.

2 weeks 21 hours ago
Wayne State University Press is excited to announce the redesign of our TV Milestones Series! For more info on the… https://t.co/t5iKM1qXje
2 weeks 6 days ago
Hey @waynestate Warriors! Don't forget to show your One Card and save 30% off your order at @WSUPress! Details a… https://t.co/dVkj0eylOc
1 month 1 week ago
RT @waynestatealum: Joseph Harris (@PrinceLanzen) is a 2013 @WayneStateCLAS alum. His debut book, You’re in the Wrong Place, was publis… https://t.co/tPMo8Hs5vi