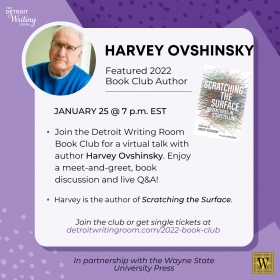 "Scratching the Surface: Adventures in Storytelling" is a deeply personal and intimate memoir told through the lens of Harvey Ovshinsky’s lifetime of adventures as an urban enthusiast. He was only seventeen when he started The Fifth Estate, one of the country’s oldest underground newspapers. Five years later, he became one of the country’s youngest news directors in commercial radio at WABX-FM, Detroit’s notorious progressive rock station. Both jobs placed Ovshinsky directly in the bullseye of the nation’s tumultuous counterculture of the 1960s and 70s. When he became a documentary director, Ovshinsky’s dispatches from his hometown were awarded broadcasting’s highest honors, including a national Emmy, a Peabody and the American Film Institute’s Robert M. Bennett Award for Excellence.

But this memoir is more than a boastful trip down memory lane. It also doubles as a survival guide and an instruction manual that speaks not only to the nature of and need for storytelling but also and equally important, the pivotal role the twin powers of endurance and resilience play in the creative process. You don’t have to be a writer, an artist, or even especially creative to take the plunge, Ovshinsky reminds his readers. "You just have to feel strongly about something or have something you need to get off your chest. And then find the courage to scratch your own surface and share your good stuff with others."

Ovshinsky is an educator, known for his passionate support of and commitment to mentoring the next generation of urban storytellers. When he wasn’t teaching screenwriting and documentary production in his popular workshops and support groups, he taught undergraduate and graduate students at Detroit’s College for Creative Studies, Wayne State University, Madonna University, and Washtenaw Community College. "The thing about Harvey," a colleague recalls in "Scratching the Surface," "is that he treats his students like professionals and not like newbies at all. His approach is to, in a very supportive and non-threatening way, combine both introductory and advanced storytelling in one fell swoop."

A Memoir by Harvey Ovshinsky
Foreword by Don Gonyea

The inspiring story of one of Detroit’s most creative and prolific storytellers.

6 hours 2 min ago
HAPPY PUB DATE! Dan Gerber said "If you make yourself available to Cindy Hunter Morgan’s poems, they will revivif… https://t.co/L60dTqsUUj
1 day 2 hours ago
Grab your copy or e-book of @fkwang's YOU CANNOT RESIST ME WHEN MY HAIR IS IN BRAIDS today! https://t.co/htFDjNa9yj https://t.co/zHyt049441
4 days 4 hours ago
Wayne State University Press is proud to announce our winner and finalists of the 2022 Next Generation Indie Book A… https://t.co/Ozy1WEQY1i