Essay'd, Alumni, and the Field of Memory 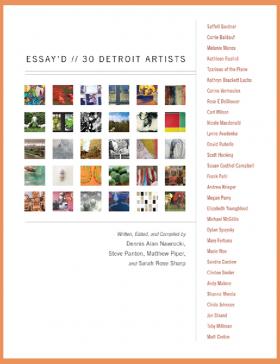 The James Pearson Duffy Department of Art and Art History is pleased to present Time Moves in One Direction, Memory Another: Essay'd, Alumni, and the Field of Memory at the Art Department Gallery, October 14 through December 9, 2016. The opening reception will be held on Friday, October 14, 5-8PM.

Additional special programming includes a screening of Built and Rebuilt: The Detroit School of Arts Story, followed by a discussion with Kate Levy and others involved in the making of the documentary on Wednesday, November 2, at 6:30PM; a gallery tour and discussion with artists featured in the exhibition on Thursday, November 17, at 6:30PM; and a closing reception on Thursday, December 8 from 6-8PM that will feature readings and the release of an essay on Ed Fraga.

This show is based around a small group of artists whose defining characteristic is that they are Wayne State alumni featured in "Essay'd," a recently published volume of essays about Detroit artists. Simultaneously, though, it is an exhibition that aspires to connect the artists conceptually, through the diverse ways in which their work relates to the field of memory.

Memory is a subject that is of great relevance to the contemporary moment in Detroit. We are at a time, as writer Marsha Music notes in her essay "The Kidnapped Children of Detroit," where the majority of people who remember the great demographic shifts outward from the city experienced them as children, and are now approaching old age. This is clearly part of the urgency that is driving the documentary aspects of the Detroit Historical Museum's "Detroit 1967" project, for example.

The mechanisms through which the topic of memory appears in this exhibition are diverse, and often subtle. Rarely are they the primary intention of the artist, and sometimes they may emerge unexpectedly - for example Saffell Gardner's epiphany that the recurring symbols in what appeared to be abstract compositions were actually manifestations of corresponding elements in the collective memory of the African diaspora. By allowing space for the unconscious and the unpredictable, the work on display here creates space for reflection, not just on the often lengthy and noteworthy careers of the artists involved, but also on art's intertwined relationship to ever-present processes of remembering and forgetting.

Lynne Avadenka is a recipient of a 2009 Kresge Arts Fellowship, and in 2016 received a Career Achievement Award from the Art and Art History Department of Wayne State University, from which she holds both BFA and MFA degrees. Her work is exhibited and collected internationally, and she is currently the Director of Signal-Return, a community letterpress print shop in Detroit’s historic Eastern Market District. The work on display here is from the series "Gone," created by Avadenka following the death of her father, and influenced by the book of Ecclesiastes.

Alexander Buzzalini graduated from Wayne State University in 2013 with a BFA in Printmaking and a minor in anthropology. His current art practice focuses on the study of cowboys as a cultural icon of America. Buzzalini is interested in the myths and legends of the old west as told through the genre of Western cinema and how these contribute to the collective memory of the American psyche.

Sandra Cardew began studies in visual arts in the 1980's after a debilitating illness ended a long career in theater as a dancer and choreographer. Her powerful and highly affecting work utilizes multiple mediums, theater-like maquettes, and concepts of anthropomorphism and the collective unconscious, to imbue her strange hybrid characters with an elusive, but haunting, mnemonic potential.

Ed Fraga is a recipient of a 2009 Kresge Artist Fellowship and a 2011 Adolph and Esther Gottlieb Fellowship. His paintings are in the public collections of The Detroit Institute of Arts, Cranbrook Art Museum, The Flint Institute of Arts, The Kalamazoo Institute of Arts and The Federal Reserve Bank of Chicago. Since 1996 he has been making art using personal materials of people close to him. In 2013, a friend gave him a stack of blueprints, once belonging to the architect John Hilberry, of design renovations to a sanctuary in Ann Arbor. These blueprints form the physical basis for the Sanctuary series, examples of which are shown here.

M. Saffell Gardner holds BFA and MFA degrees in painting from Wayne State University. He has exhibited in Brazil, Ghana, Jamaica and throughout the United States, including a solo show at the Charles H. Wright Museum of African American History in 2000. He has performed major commissions for the City of Detroit and the Detroit Public Schools and his work is in numerous collections including the Henry Ford Hospital, the City of Detroit, the Detroit Medical Center and Blue Cross Blue Shield. He is a 2015 Kresge Arts Fellow.

Kate Levy uses extensive place-based research to explore issues of social justice through video, photography and artist books. Her short, and full-length videos on water and gentrification issues in Detroit have been widely influential by raising awareness of important contemporary issues. Her film "Built and Rebuilt" contrasts first-person oral-histories of the Detroit School of Arts with the historical development narratives used to justify placing the school under the control of an emergency manager appointed governing board.
Kathleen Rashid is a lifelong Detroiter who grew up in the Linwood and Lothrop area. Her paintings are exercises in opening perceptions of the phenomenal world beyond routine verbal preconceptions, into meditative levels of observation. She has recently taken over the home that has been in her family's possession since the 1950's, and has since started the "Property" series displayed here. As Rashid puts it, "It's a meditation on the arbitrary boundaries of the self formulated by memory, identification and responsibility, and how perception has the potential to shape, reinforce, change and disintegrate them."

Ulysses Spencer is a combat veteran and artist. He is an advocate for art as a way of articulating memories at the root of Post-Traumatic Stress Disorder, a condition he personally endured for over 30 years before seeking treatment. He is currently a peer support specialist at the John D Dingell VA hospital in Detroit, where he works closely with the resident art therapist.

Jon Strand graduated from Wayne State with a degree in Education, but then proceeded to pursue a largely self-taught career in art. He is best known for his exactingly laborious pointillist ink paintings, which he creates in series that are epic in duration and content. His long-term work "The Oracle of the Golden Temple," examines themes of mortality and immortality. Strand's art, which he describes as "the corner stone & lodestar of my existence," is in numerous collections, including that of the Detroit Institute of the Arts.

Andrew Thompson is a sculptor, installation artist, educator, curator, musician, and gardener. He has an MFA in Sculpture from Cranbrook Academy of Art, and has been exhibiting his sculptures and installations throughout Southeast Michigan for over a decade. He is active in numerous local arts organizations, and has recently curated the exhibitions "The Scent of Rain on Dry Earth" at the Detroit Artists Market, and "Place Names the Place" at Eastern Michigan University.

Essay'd is an online writing project by Dennis Alan Nawrocki, Steve Panton, Matthew Piper, and Sarah Rose Sharp that publishes short, illustrated essays about contemporary Detroit artists on a regular basis. If it continues at its current pace, it will reach 100 artists by early 2018 - an unprecedented survey of Detroit art. The first 30 essays were published in print form by Wayne State University Press on August 1, 2016.

Essay'd has also mounted six exhibitions (each featuring 10 of the 60 artists written about to date), and numerous artist talks at institutions throughout the Metro Detroit area. In September/October, the Essay'd team will be hosting a writing workshop at MOCAD in conjunction with the Sanford Biggers exhibition "Subjective Cosmology."

The James Pearson Duffy Department of Art and Art History is a division of Wayne State’s College of Fine, Performing and Communication Arts, educating the next generation of visual artists, designers and art historians. Wayne State Un¬iversity, located in the heart of Detroit’s midtown cultural center, is a premier urban research university offering more than 350 academic programs through 13 schools and colleges to more than 28,000 students.

12 hours 13 min ago
RT @livingwriters: Hoping to get Living Writers podcast up + running down the road. Until then, here's Nick Heath's excellent comment… https://t.co/KDUPPnhZkO
22 hours 38 min ago
RT @POETSorg: In this time of uncertainty and great concern, people are turning to poems to seek language that centers us. In res… https://t.co/01gKEB9HcO
23 hours 24 min ago
Several WSUP titles grace this magnificent list! Can any superfans out there spot them? https://t.co/w3e4IATtGJ