Book Talk: From Left to Right 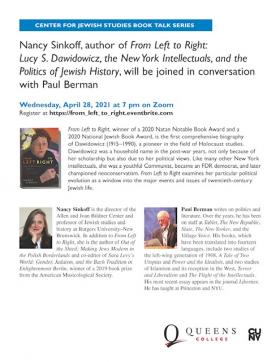 Nancy Sinkoff, author of From Left to Right: Lucy S. Dawidowicz, the New York Intellectuals, and the Politics of Jewish History, will be joined in conversation with Paul Berman
From Left to Right, winner of a 2020 Natan Notable Book Award and a 2020 National Jewish Book Award, is the first comprehensive biography of Dawidowicz (1915–1990), a pioneer in the field of Holocaust studies. Dawidowicz was a household name in the postwar years, not only because of her scholarship but also due to her political views. Like many New York intellectuals, she was a youthful communist, became an FDR democrat, and later championed neoconservatism. From Right to Left examines her particular political evolution as a window into the major events and issues of twentieth-century Jewish life.

Nancy Sinkoff is the director of the Allen and Joan Bildner Center and professor of Jewish studies and history at Rutgers University–New Brunswick. In addition to From to Left to Right, she is the author of Out of the Shtetl: Making Jews Modern in the Polish Borderlands and co-editor of Sara Levy’s World: Gender, Judaism, and the Bach Tradition in Enlightenment Berlin, winner of a 2019 book prize from the American Musicological Society.

Paul Berman writes on politics and literature. Over the years he has been on staff at Tablet, The New Republic, Slate, The New Yorker, and the Village Voice. His books, which have been translated into fourteen languages, include two studies of the leftwing generation of 1968, A Tale of Two Utopias and Power and the Idealists, and two studies of Islamism and its reception in the West, Terror and Liberalism and The Flight of the Intellectuals. His most recent essay appears in the journal Liberties. He has taught at Princeton and NYU.