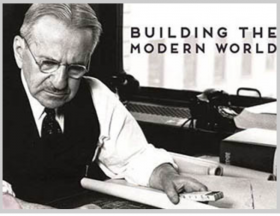 Learn about the life and work of famed Detroit architect Albert Kahn -- the architect Edsel and Eleanor chose to design Ford House -- in a talk by Michael H. Hodges, author of the book Building the Modern World: Albert Kahn in Detroit. Kahn was a German-Jewish immigrant who rose from poverty to revolutionize industrial architecture and design many iconic Detroit structures. Delve into Kahn’s work, including National Historic Landmarks like Ford House.
Upon registration, you will receive an access code and a link to use to join the meeting. Our program uses the Zoom platform. You will need to download the Zoom app to your smartphone or tablet, or log into the Zoom website before you begin the workshop.

About the presenter: Michael Hodges is the fine-arts writer at The Detroit News, where he’s worked since the early 1990s. Building the Modern World: Albert Kahn in Detroit is his second book. His first book which features his own photography, Michigan’s Historic Railroad Stations, was named a Michigan Notable Book in 2013 by the Library of Michigan. While his roots run deep in Detroit, Hodges grew up on a dairy farm and attended Cranbrook School in Bloomfield Hills. He resides in a historic district of Ann Arbor.