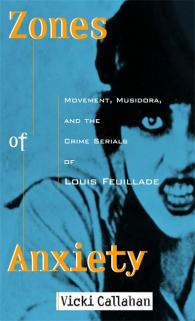 Movement, Musidora, and the Crime Serials of Louis Feuillade

The crime serials by French filmmaker Louis Feuillade provide a unique point of departure for film studies, presenting modes rarely examined within early cinematic paradigms. Made during 1913 to 1920, the series of six films share not only a consistency of narrative structure and style but also a progressive revelation of the criminal threat—a dislocation of both cinematic and ideological subjectivity—as it shifts realms of social, cultural, and aesthetic disturbance. Feuillade’s work raises significant questions of cinema authorship, film history, and film aesthetics, all of which are examined in Vicki Callahan’s groundbreaking work Zones of Anxiety, the first study to address the crime serials of Louis Feuillade from a feminist perspective.

Zones of Anxiety merges cultural history and feminist film theory, arguing for a different kind of film history, a "poetic history" that is shaped by the little-examined cinematic mode of "uncertainty." Often obscured by film technique and film historians, this quality of uncertainty endemic to the cinema comes in part from the formal structures of repetition and recursion found in Feuillade’s serials. However, Callahan argues that uncertainty is also found in the "poetic body" of the actress Musidora who is featured in two of the serials. It is the mobility of the Musidora figure—socially, culturally, sexually, and textually—that makes her a powerful image and also a place to view the historical blind spots of film studies and feminist studies with regard to questions of race, class, and sexuality.

Callahan’s substantial focus on archival research builds a foundation for a host of compelling arguments for a new feminist history of film. Other studies have touched on the issue of gender in early cinema, though until now neither Feuillade’s work nor French silent film have been examined in light of feminist film theory and history. Zones of Anxiety opens up the possibility of alternate readings in film studies, illuminating our understanding of subjectivity and situating a spectatorship that acknowledges social and cultural differences.

Vicki Callahan is associate professor of film in the Peck School of the Arts at the University of Wisconsin–Milwaukee.

Callahan offers a new reading of Louis Feuillade's famous crime series and serials (1913–1920) as a single text in which the threat of criminality is mapped as a disturbing form of profound uncertainty, or 'dislocation,' that produces shifting (yet related) 'zones of anxiety' from Fantômas to Barrabas. Although that anxiety shifts over time-first linked to the modern city and the bourgeois family, then to the female body and psyche, and finally to the male body and psyche-the greatest threat is embodied, in Les vampires and Judex, in the elusive, ever-changing figure of Musidora."

With nuanced understanding of the field-defining concepts of intertextuality, Callahan interweaves numerous discursive strands around a conceptual 'moment' in the history of representations. The result is a truly interdisciplinary work, as wide-ranging as the encyclopedia scholarship of the eighteenth century, as focused as the most scrupulous histories of a particular time and place, and, what's more, as pleasurable as the most imaginative of surrealist texts, with its unexpected insights lurking just around every page, and its suggestive resonances for the reader of any interest."

Zones of Anxiety is a wonderful analysis of Louis Feuillade's cinematic serials, which have been an inspiration to filmmakers and other artists throughout the twentieth century. Vicki Callahan gives us a fresh approach to Feuillade's work, not only situating it within the context of early French film history, but also within feminist theory and feminist film history. Indeed, Callahan's book demonstrates why feminist questions of spectatorship, stardom, and film form are central to the writing (and rewriting) of film history."

Vicki Callahan's Zones of Anxiety: Movement, Musidora, and the Crime Serials of Louis Feuillade is the first work of its length on Feuillade's serials to appear in the United States, and for this we can all be thankful. Callahan's work is not only the first full-length English language work on Feuillade, but also the first full-length English language work on Musidora. Her book will doubtless become one of the key references on both seminal figures of French cinema."

2 days 54 min ago
Now a National Jewish Book Award Finalist! @JewishBook https://t.co/qTKAeUEPVX
2 days 4 hours ago
RT @Steph_Steinberg: Tomorrow @ 7 p.m.! Join me and @DETWritingRoom at The Whitney for our first #2023AuthorSeries event ft. @waynestate… https://t.co/pssbi2NLNs
6 days 5 hours ago
SAVE THE DATE! Join author Desiree Cooper and illustrator Bec Sloane this Saturday for a behind the scenes look at… https://t.co/cKDBmbewOa