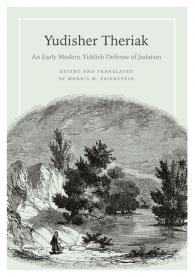 The Yudisher Theriak [Jewish Theriac] by Zalman Zvi of Aufhausen, first published in Hanau, in 1615, was a response to an anti-Jewish work titled Jüdischer abgestreiffter Schlangenbalg [Jewish Shed Snakeskin], written by a Jewish convert to Christianity, Samuel Friedrich Brenz, and published in Nürnberg and Augsburg in 1614. Brenz’s work was part of a genre of anti-Jewish books and pamphlets written in German and addressed to Christians that purported to reveal how Jews mocked and blasphemed against the Christian religion, cursed their Christian neighbors, and engaged in magic and witchcraft in order to inflict damage to their possessions and livelihoods. The name of Zalman Zvi’s book is a direct allusion to Brenz’s title, but it also hints at a larger purpose. Theriac is a Greek and Latin term that means "the antidote to the bite of a venomous snake." Perhaps Zvi hoped that his book would also serve as a theriac for the scourge of anti-Judaism, which was prevalent in his generation.

The Yudisher Theriak presents an interesting picture of how a learned Jew might respond to the many accusations against Jews and Judaism that became standardized and were repeated from author to author. The Yudisher Theriak makes a passing appearance in most scholarly books and many articles written about Christian-Jewish relations. Its existence is acknowledged and occasionally a fact or idea is cited from it, but its arguments and ideas have not been integrated into the scholarly literature on this subject. One reason that it has not received the attention it deserves is its language. It is written in a form of Early Modern Yiddish, more influenced by German and less familiar than its contemporary eastern European variant. In addition, Zalman Zvi was a learned Jew who interspersed Hebrew phrases, rabbinic terminology, and allusions to rabbinic literature in his work. Morris Faierstein’s goal in this work is not to respond to all the references and allusions in the scholarly literature that the original text touches on, but rather to make the work available in an annotated translation that can be a useful tool in the study of Jewish-Christian relations in the early modern period and, more broadly, for early modern Jewish historical and cultural studies. The analysis and clarification of the many issues raised in the Yudisher Theriak await further studies. Faierstein has taken the first step by making the work available to an audience wider than the very narrow band of specialists in Early Modern Yiddish literature.

Scholars and students of Jewish-Christian relations and early modern Jewish historical and cultural studies will appreciate the availability of this previously inaccessible text.

Morris M. Faierstein is a research associate at the Meyerhoff Center for Jewish Studies of the University of Maryland. Among his books are The Libes Briv of Isaac Wetzlar; Jewish Mystical Autobiographies: Book of Visions and Book of Secrets; From Safed to Kotsk: Studies in Kabbalah and Hasidism; and The Ze’enah U-Re’enah: A Critical Translation.

The Yudisher Theriak is a fundamental work for understanding the responses by Jews to the accusations against them by Christians. Remarkably translated, this edition is a major testimony to the theological debates between Jews and Christians during the early modern period.

– Jean Baumgarten, professor at the National Center for Scientific Research in Paris

A remarkable achievement of a first-class expert of old Yiddish literature study. Faierstein presents an annotated translation of the first and only Jewish-Christian polemical book in Yiddish, in early modern times.

– Zeev Gries, emeritus professor at The Goldstein-Goren Department of Jewish Thought, Ben-Gurion University of the Negev

[This] felicitous annotated translation of the Yudisher Theriak provides a vibrant example of how a learned Jew responded to standardized and oft-repeated accusations against Jews and Judaism in early modern Germany. Faierstein has provided access to a broad audience to read and appreciate this unique text.

– Stephen D. Benin, author of The Footprints of God: Divine Accommodation in Jewish and Christian Thought and founding director of Jewish Studies at the University of Memphis

This book will not only interest scholars of early Modern Germany, but scholars of Christian-Jewish relations generally. Faierstein’s translation of Zvi’s work—the first time it has been published in English—gives this book great value.

Faierstein provides an illuminating and erudite introduction and a clear translation and annotation of the complex text. . . This is an extremely important text for collections dealing with Jewish–Christian relations and religious polemics in general as well as early modern European religious history.