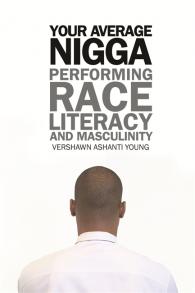 Including solid illustrative material, it is a compelling and thought-provoking piece of work.

In Your Average Nigga, Vershawn Ashanti Young disputes the belief that speaking Standard English and giving up Black English Vernacular helps black students succeed academically. Young argues that this assumption not only exaggerates the differences between two compatible varieties of English but forces black males to choose between an education and their masculinity, by choosing to act either white or black. As one would expect from a scholar who is subject to the very circumstances he studies, Young shares his own experiences as he exposes the factors that make black racial identity irreconcilable with literacy for blacks, especially black males.

Drawing on a range of interdisciplinary scholarship in performance theory and African American literary and cultural studies, Young shows that the linguistic conflict that exists between black and white language styles harms black students from the inner city the most. If these students choose to speak Standard English they risk alienating themselves from their families and communities, and if they choose to retain their customary speech and behavior they may isolate themselves from mainstream society. Young argues that this conflict leaves blacks in the impossible position of either trying to be white or forever struggling to prove that they are black enough. For men, this also becomes an endless struggle to prove that they are masculine enough. Young calls this constant effort to display proper masculine and racial identity the burden of racial performance.

Ultimately, Young argues that racial and verbal performances are a burden because they cannot reduce the causes or effects of racism, nor can they denaturalize supposedly fixed identity categories, as many theorists contend. On the contrary, racial and verbal performances only reinscribe the essentialism that they are believed to subvert. Scholars and teachers of rhetoric, performance studies, and African American studies will enjoy this insightful volume.

Vershawn Ashanti Young is associate professor of drama and speech communication at the University of Waterloo.

Your Average Nigga is a brilliantly constructed book that is as equally captivating as it is intellectually stimulating. What's especially appealing about Your Average Nigga is that is can be used in a number of disciplines from Linguistics to American Studies because of the complex lens in which Young explores literacy and identity."

In an engaging style, Young mixes narrative autocritography, his mother's tongue and wit, analysis of literature on race, African American history, and language and literacy studies to argue against the dominant ideological model of literacy and for a theory of code meshing-a 'technique [that] meshes versions of English together in a way that's more in line with how people actually speak and write anyway.' Although he knows code meshing is not a panacea, he sees it as one way to improve the retention rates and achievement of black students in higher education. Read Young. Argue with him. Take him to task. You may not agree with his every point, but you will come away from this book thinking deeply about racism, sexuality, class, gender, their role and yours in the teaching of literacy."

Vershawn Young's Your Average Nigga has the ingredients of a good novel: dazzling prose, a seductive plot, and a critical and likeable narrator. Beyond its wonderful storytelling, however, this manuscript is undergirded by a provocative theorizing about racial, gender, and sexual identity vis-à-vis language use."

– E. Patrick Johnson, associate professor of performance studies and African American studies at Northwestern University and author of Appropriating Blackness: Performance and the Politics of Authenticity

The ironic title of this sociological autobiographical presentation of the dilemma in which many upwardly mobile blacks find themselves says it all. Including solid illustrative material, it is a compelling and thought-provoking piece of work."

Punctuated throughout with verve, passion, and rigor, Vershawn Ashanti Young's Your Average Nigga is a smart and provocative addition to the burgeoning field of black masculinity studies."