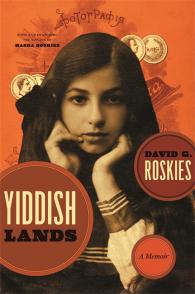 David G. Roskies
With a CD Featuring the Singing of Masha Roskies

Yiddishlands is a tour de force.

A rich, sweeping memoir by David G. Roskies, Yiddishlands proceeds from the premise that Yiddish culture is spread out among many different people and geographic areas and transmitted through story, song, study, and the family. Roskies leads readers through Yiddishlands old and new by revisiting his personal and professional experiences and retelling his remarkable family saga in a series of lively, irreverent, and interwoven stories. Beginning with a flashback to his grandmother’s storybook wedding in 1878, Yiddishlands brings to life the major debates, struggles, and triumphs of the modern Yiddish experience, and provides readers with memorable portraits of its great writers, cultural leaders, and educators.

Roskies’s story centers around Vilna, Lithuania, where his mother, Masha, was born in 1906 and where her mother, Fradl Matz, ran the legendary Matz Press, a publishing house that distributed prayer books, Bibles, and popular Yiddish literature. After falling in love with Vilna’s cabaret culture, an older man, and finally a fellow student with elbow patches on his jacket, Masha and her young family are forced to flee Europe for Montreal, via Lisbon and New York. It is in Montreal that Roskies, Masha’s youngest child, comes of age, entranced by the larger-than-life stories of his mother and the writers, artists, and performers of her social circle. Roskies recalls his own intellectual odyssey as a Yiddish scholar; his life in the original Havurah religious commune in Somerville, Massachusetts, in the 1970s; his struggle with the notion of aliyah while studying in Israel; his visit to Russia at the height of the Soviet Jewry movement; and his confrontation with his parents’ memories in a bittersweet pilgrimage to Poland. Along the way, readers of Yiddishlands meet such prominent figures as Isaac Bashevis Singer, Melekh Ravitch, Itsik Manger, Avrom Sutzkever, Esther Markish, and Rachel Korn.

With Yiddishlands, readers take a whirlwind tour of modern Yiddish culture, from its cabarets and literary salons to its fierce ideological rivalries and colorful personalities. Roskies’s memoir will be essential reading for students of the recent Jewish past and of the living Yiddish present.

David G. Roskies is the Sol and Evelyn Henkind Chair in Yiddish Literature and Culture and professor of Jewish Literature at the Jewish Theological Seminary. He is author of numerous books, including Against the Apocalypse and A Bridge of Longing: The Lost Art of Yiddish Storytelling.

David G. Roskies's passionate narrative of a brilliant family is more than a memoir of rupture and renewal-it is a history of a civilization, its languages, its lost cities, its living songs."

– Cynthia Ozick, recipient of the National Book Critics Circle Award, and finalist for the Pulitzer Prize

Among the greatest strengths of Yiddishlands is Roskies skill in recapturing not only his mother's stories, but also the rich nuance and cadence with which she told them. Roskies even included in the book a CD of his mother signing Yiddish songs, and providing the reader with a full multimedia experience of Masha as he knew her."

Roskies leads readers through Yiddishlands old and new by revisiting his personal and professional experiences and retelling his family saga in a series of interwoven stories. . . . Yiddishlands brings to life the major debates, struggles, and triumphs of the modern Yiddish experience and provides readers with portraits of its great writers, cultural leaders, and educators.

Yiddishlands' is a richly transcendent piece of writing that salvages many episodes of personal, family, and social history, not only in the Old Country but in modern Montreal and the numerous other places (hence the plural title)."

Yiddishlands is a thoughtful reflection on a complicated epoch through which the Jews have passed. The richness of the memoirs and the hopeful tone of the writing ultimately belie the author's own contention 'that everything of importance happened before I was born'.

David Roskies is the only one of his generation who can map the Yiddish literary world after the war with personal stories, vivid portraits of the key players, and extraordinary acumen and wit. Yiddishlands is a tour de force.

– Hana Wirth-Nesher, professor of English and American studies and director of the Goldreich Family Institute for Yiddish Language, Literature, and Culture at Tel Aviv University

4 hours 20 min ago
Happy Pub Date to THE SPOOK WHO SAT BY THE DOOR, SECOND EDITION! This new edition of a literary classic now includ… https://t.co/XrCsLZvf4D
4 hours 23 min ago
RT @DarkProjections: Returned from a great two weeks in Europe to find copies of my new book! Kolchak:The Night Stalker, one of the Pion… https://t.co/kPJ5kKLRyr
1 day 1 hour ago
RT @oneitadetroit: Thrilled that @WSUPress is releasing the 2E of Sam Greenlee's "The Spook Who Sat by the Door" tomorrow. Introductio… https://t.co/hZpAjxluIl