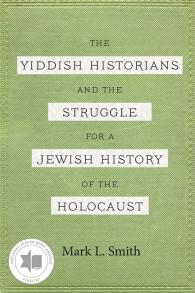 The Yiddish Historians and the Struggle for a Jewish History of the Holocaust identifies the Yiddish historians who created a distinctively Jewish approach to writing Holocaust history in the early years following World War II. Author Mark L. Smith explains that these scholars survived the Nazi invasion of Eastern Europe, yet they have not previously been recognized as a specific group who were united by a common research agenda and a commitment to sharing their work with the worldwide community of Yiddish-speaking survivors.

These Yiddish historians studied the history of the Holocaust from the perspective of its Jewish victims, focusing on the internal aspects of daily life in the ghettos and camps under Nazi occupation and stressing the importance of relying on Jewish sources and the urgency of collecting survivor testimonies, eyewitness accounts, and memoirs. With an aim to dispel the accusations of cowardice and passivity that arose against the Jewish victims of Nazism, these historians created both a vigorous defense and also a daring offense. They understood that most of those who survived did so because they had engaged in a daily struggle against conditions imposed by the Nazis to hasten their deaths. The redemption of Jewish honor through this recognition is the most innovative contribution by the Yiddish historians. It is the area in which they most influenced the research agendas of nearly all subsequent scholars while also disturbing certain accepted truths, including the beliefs that the earliest Holocaust research focused on the Nazi perpetrators, that research on the victims commenced only in the early 1960s and that Holocaust study developed as an academic discipline separate from Jewish history. Now, with writings in Yiddish journals and books in Europe, Israel, and North and South America having been recovered, listed, and given careful discussion, former ideas must yield before the Yiddish historians’ published works. The Yiddish Historians and the Struggle for a Jewish History of the Holocaust is an eye-opening monograph that will appeal to Holocaust and Jewish studies scholars, students, and general readers.

Mark L. Smith has taught Jewish history at the University of California, Los Angeles, where he received his PhD in 2016. He writes and lectures on East European Jewish history and culture, with a special interest in Holocaust historiography and Yiddish scholarly writing.

The Yiddish Historians and the Struggle for a Jewish History of the Holocaustis possibly the most important contribution to the historiography of the Holocaust published in a number of years. The Yiddish historians of the Shoah, the first to attempt an objective approach to the Catastrophe, found their own preeminent historian. Smith’s book is an outstanding achievement.

This well-researched and original book makes a major contribution to our understanding of postwar Yiddish language historical scholarship on the Holocaust. Contrary to a widely held belief, Mark Smith shows that serious historical investigation of the Holocaust began right after the war, not decades later. This book reveals the extent to which postwar Yiddish cultural creativity embraced not only poetry and fiction but also serious scholarly research.

Two main factors determined the use of Yiddish as a language for historical writing: a significant readership and Yiddishist enthusiasts’ zeal to prove that the language was well equipped for such things. At the same time, the linguistic barrier led to marginalization and neglect of this valuable corpus of material. Mark Smith does a commendable job trying to bring the ‘hidden’ historical research into the mainstream.

With a keen sense of historical purpose, painstaking scholarship, and a commitment to unlocking the silenced voices of the past, Mark Smith's The Yiddish Historians and the Struggle for a Jewish History of the Holocaust restores a critical chapter to twentieth-century Jewish historiography. The contributions of pioneering survivor historians Phillip Friedman, Isaiah Trunk, Mark Dworzecki, Nachman Blumental, and Joseph Kermish—all of whom wrote in Yiddish to assure the Jewish perspective on the Holocaust--can finally now be heard. Continuity, not rupture, defined their work, a heretofore missing chapter in the chain of East European Jewish historical writing from the late nineteenth century, through the interwar years, and during the terrors of the war itself. Smith’s comprehensive bibliographies make The Yiddish Historians an unparalleled resource for any scholar working on modern Jewish historiography and consciousness.

– Nancy Sinkoff, author of Out of the Shtetl: Making Jews Modern in the Polish Borderlands

An immense scholarly contribution in themselves and are an indispensable resource for scholars working on the Holocaust, particularly those unable to read Yiddish. Taken as a whole, the book makes a
remarkable contribution to the project of recovering the Yiddish historians’ works and beginning to recognize their far-reaching legacy.

Mark L. Smith took it upon himself t do justice to five historians who were Holocaust survivors themselves and wrote pioneering books and papers on the Holocaust n the early years after the war. In the end, it becomes obvious that these Yiddish historians were indeed pioneers in their vision, perceptions, and methodologies and I salute Mark L. Smith for giving them the platform and honor they deserve in his notable work.

Mark L. Smith has done a tremendous service to our understanding of the Holocaust in general and, more specifically, how Jews responded to their experiences during the Holocaust. This book is well-written and the biographies of the historians, as well as each one’s bibliography, is tremendously helpful in and of itself.

It has expanded the historiographical field of vision. In pursuit of a full understanding of Jewish life within the Nazi orbit, especially in eastern Europe, scholars cannot now help, thanks to Smith’s masterly exposition, but seriously take into account the works of the Yiddish historians.

– Gabriel N. Finder, Journal of the Association for Jewish Studies