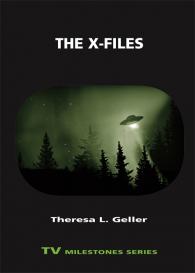 Premiering in 1993 on FOX Network, The X-Files followed the investigations of two FBI special agents, Fox Mulder and Dr. Dana Scully as they pursued the supernatural, the bizarre, and the alien, as well as the government conspiracies at work to conceal the truth of their existence. For nine seasons, Chris Carter’s series broke new ground in complex narrative television by integrating science fiction and horror with the forensic investigation of the detective genre. Shaped by the conspiracy films of the 1970s, the series had the ability to comment on the contemporary political climate one week and poke fun at its own self-seriousness the next. Responding to its cinematic visual style, haunting score, complex and nuanced writing, witty dialog, and the exceptional acting of David Duchovny and Gillian Anderson, who elevated the show with their chemistry, fans embraced The X-Files, making it one of the most beloved cult television series to this day.

The aim of this book is to provide the reader with several points of entry into the television series, with social, cultural, and political analyses framed by the examination of the show’s many overlapping genres. Divided into chapters highlighting the episodic standalones known as the "monster-of-the-week" (MOTW) and the serial mythology or "mytharc," the first section of the book explores the ways the MOTWs represented social differences in stories of fantastic, supernatural beings both strange and estranged. Through comparative analyses and detailed discussions of individual episodes, it becomes clear that the MOTWs were less concerned with the alien than with alienation, using the figure of the "monster" to focus on a range of ethnic, racial, and social outsiders. The latter half of the book turns to the serialized mythology, examining both the arc of the alien conspiracy as well as the fan-driven relationship between Mulder and Scully. While the romance subplot was powered in part by the show’s fans, the alien-government conspiracy mythology was Carter’s unique vision. This volume argues that The X-Files was a milestone because it employed the generic tropes of science fiction to call our attention to contemporary global politics and the history behind them. Specifically, Theresa Geller maps the ways the series used the mytharc not to predict the future, but to unbury the violence and injustice of our own past.

With its return to television as an "event series" in 2016, this volume offers a timely assessment of the show’s cultural relevance and social significance. Fans of the show, as well as readers interested in cultural studies, genre criticism, race and ethnicity, fan studies, social commentary, and gender studies will appreciate this insightful examination of the series.

Theresa L. Geller is associate professor of film theory and history in the Department of English at Grinnell College and was recently a Mellon research fellow at Yale University. She has contributed to several scholarly publications, including Camera Obscura, Spectator, Frontiers, Biography, Rhizomes, and Senses of Cinema.

By analyzing 'The X-Files’ engagement with technoscience, governmentality, institutional corruption, and threats to the intimacy of partnership, this book gives us fresh and valuable ways of thinking about one of the most important and influential contemporary television series.

By analyzing 'The X-Files’ engagement with technoscience, governmentality, institutional corruption, and threats to the intimacy of partnership, this book gives us fresh and valuable ways of thinking about one of the most important and influential contemporary television series.

[The reviewer] has read a lot of X-Files books over the years and considers this one of the best. It’s certainly given her a lot to think about and she knows she will be looking at many episodes in a new light next time she watches them.

[Geller] has produced the first major work to include examination of the series' revival in the form of a tenth season in 2016. That Geller does so with straightforward language, clear notes, and a logical organization structure (as well as refreshing brevity) is laudable.

13 hours 53 min ago
DETROIT BOOK OF THE DAY: DAY 1 THE DETROIT SYMPHONY ORCHESTRA details the history of the @DetroitSymphony as seen… https://t.co/7zpUnVRwiw
1 day 8 hours ago
In honor of the #CityofDetroit turning 321 years old on July 24th, WSUPress will be showcasing one Detroit Book of… https://t.co/PA7nONh4C0
1 day 13 hours ago
OUR FALL & WINTER 2022 TITLES ARE NOW AVAILABLE FOR PRE-ORDER! Grab your copy of any of our fall & winter titles f… https://t.co/qDykAsF9sk