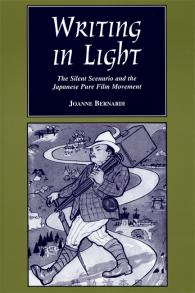 The Silent Scenario and the Japanese Pure Film Movement

Professor Bernardi has performed a sophisticated piece of detective work as she describes the early development of motion pictures in Japan, piecing together disparate pieces of information in order to reconstruct important themes and movements.

While most people associate Japanese film with modern directors like Akira Kurosawa, Japan’s cinema has a rich tradition going back to the silent era. Japan’s "pure film movement" of the 1910s is widely held to mark the birth of film theory as we know it and is a touchstone for historians of early cinema. Yet this work has been difficult to access because so few prints have been preserved.

Joanne Bernardi offers the first book-length study of this important era, recovering a body of lost film and establishing its significance in the development of Japanese cinema. Building on a wealth of original-language sources—much of it translated here for the first time—she examines how the movement challenged the industry’s dependence on pre-existing stage repertories, preference for lecturers of intertitles, and the use of female impersonators.

Bernardi provides in-depth analysis of key scripts—The Glory of Life, A Father’s Tears, Amateur Club, and The Lust of the White Serpent—and includes translations in an appendix. These films offer case studies for understanding the craft of screenwriting during the silent era and shed light on such issues as genre, authorship and control, and gender representation.

Writing in Light helps fill important gaps in the history of Japanese silent cinema. By identifying points at which "pure film" discourse merges with changing international trends and attitudes toward film, it offers an important resource for film, literary, and cultural historians.

Professor Bernardi has performed a sophisticated piece of detective work as she describes the early development of motion pictures in Japan, piecing together disparate pieces of information in order to reconstruct important themes and movements. . . . Altogether, she gives us a new and striking vision of the beginnings of a vibrant art that has long achieved worldwide interest.

Berdardi's is an important contribution to film studies. Her account of Japanese cinema's and early years and their consequent reform is-with its new material and its scrupulous scholarship-required reading for us all.

6 hours 27 sec ago
Happy Pub Date! HOUSE AND HOME is a collection of poems that intensely explore the beauty & wisdom to be found in w… https://t.co/MYnkKJxcrx
2 days 8 hours ago
Join WSU President M. Roy Wilson for a book talk next Wednesday! Copies of his memoir will be available for sale a… https://t.co/6q5w5dtFtu
4 days 8 hours ago
TONIGHT! Join @stephanie_heit at @ShopBooksweet for local author's night! https://t.co/pTny5OErDe