Home » Books » The World of a Few Minutes Ago 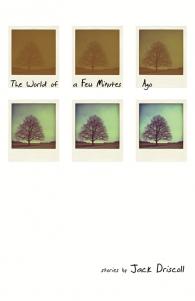 The World of a Few Minutes Ago

In The World of a Few Minutes Ago, award-winning author Jack Driscoll renders ten stories from the point of view of characters aged fourteen to seventy-seven with a consistently deep understanding of each character's internal world and emotional struggles. All of the stories are set against the quiet, powerful northern Michigan landscape and share a sense of longing, amplified by the beautiful but often unforgiving surroundings. With keen attention to the nuances of his characters and their lives, Driscoll explores both their attachments to the past and their as-yet-unseen futures as he considers relationships between loves, old friends, and parents and their children.

A twelve-year-old boy accompanies his father on a secret run to the slaughterhouse where he recently lost his job. A middle-aged divorcé waits to witness the execution of the man who murdered his daughter decades earlier. A seventy-seven-year-old man reassesses both his fifty-year marriage and his career as an AP war photographer. A sixteen-year-old girl drives through a snowstorm in a clandestine meeting with her driver's education instructor. A twentysomething couple breaks into houses to ignite the passion in their relationship. Each story is carefully crafted and lovingly delivered, as characters weigh their own feelings against their complicated perceptions of other people and the action swirling around them. Driscoll's Michigan shapes these people as surely as their grief and joy, as the setting often becomes a physical touchstone to which characters turn to navigate the immensity of the unknown universe.

Few authors have the flexibility of voice and the emotional range and depth of Driscoll, who is at his best in this collection. Readers of fiction will enjoy The World of A Few Minutes Ago.

The title (and title story) of Jack Driscoll's The World of a Few Minutes Ago is, as a phrase, eloquent shorthand for the longing that suffuses this book. For Driscoll's characters, nostalgia serves as threnody, a dark river running under these stories, although what is lamented and longed for is not so much always the dead (although they are present here too) as it is the idea of a different life, one where one's luck doesn't run out, where neither children nor parents are taken from us and where lovers don't disappear. . . . Although Driscoll doesn't offer us the sham of a guaranteed happy ending, he does offer us grace, the hard-earned miracle of the everyday where we might find ourselves 'if not anointed, then content... And yes, perhaps even grateful for whatever next thing might begin.' What Driscoll gives his characters, and us by extension, is hope.

Few authors possess the range or emotional depth that one finds in Jack Driscolls new story collection, The World of a Few Minutes Ago. Whether writing from the point of view of a twelve-year-old boy accompanying his father on a secret run to the slaughter house, or a seventy-year-old man reassessing both his fifty-year marriage and career as a war photographer, or a sixteen-year-old girl driving through a snowstorm with her drivers ed instructor, Driscoll manages to seat the reader in the lives of his characters with grace, despite a roughness that often characterizes their lived experience.

In "Prowlers," Reilly Jack's wife has an itch for trespassing, which he anxiously follows while measuring his wild love against her wild habits. In "Wonder," a man returns to Petoskey after a short stint in prison and searches for his childhood best friend. Charlene, in "Saint Ours," navigates the violence of romance, north country winter and possibilities yet un-lived. Whether through grief, regret, awe or great love, the characters of The World of a Few Minutes Ago find the past in their present.

Fans of the work of Lee K. Abbott and the late, legendary Barry Hannah will find much to savor in Jack Driscoll's colorful stories of hope and despair. His characters may feel lost and crushed under the weight of their lives, but their plight is recognizable and deeply familiar to us all.

This book is a humanitarian triumph. His characters muddle through difficult lives, often unable to pay their power bills or their car insurance, and are unable, for sure, to understand their spouses or parents, and yet they are philosophers and conjurers of their own lives, and they look to the stars to make sense of it all.

With a good dose of thought and common sense approached all throughout, The World of a Few Minutes Ago is a fine assortment from an experienced and multiple award-winning writer.

Reading Jack Driscoll's The World a Few Minutes Ago feels like a trip through a museum of portraits, each story a finely observed and carefully rendered life as distilled in a telling moment. This writer knows not only what makes people tick, but how to turn the reader's eye to the most salient and stirring instant of recognition."

Jack Driscoll's insight into 'the complex repertoire of human grief' and his empathy for characters confronted with 'the debris of human misery' is singular. We encounter many of his characters-skittish and sometimes feeling forsaken-looking back over the trail of their lives and trying to plan a workable future in the wake of some kind of bad accident. Strung out as they are between desire and despair, they have in Driscoll their deft and savvy guardian."

Jack Driscoll is Michigan's national treasure, our state secret and seer, who knows everything about us, our stars aglitter like. . . flecks of mica" above our stale marriages and illusions of our own toughness, our wild women and our men carefully backing away from them, our lost or flown children, our broken hearts and homophobia, our snows, barrooms, and secretive waterways, our underachievers of every description. Thank God we have a new collection from Driscoll to ponder in these hard times or how we would we know ourselves? His ruthless honesty, as always, is a comfort."

Jack Driscoll has long been one of this country's best short story writers, and this book confirms it. Each enthralling story in The World of a Few Minutes Ago is filled with lyrical energy and vivid insight. A marvelous, show-stopping performance."

6 hours 25 min ago
Happy Pub Date! HOUSE AND HOME is a collection of poems that intensely explore the beauty & wisdom to be found in w… https://t.co/MYnkKJxcrx
2 days 8 hours ago
Join WSU President M. Roy Wilson for a book talk next Wednesday! Copies of his memoir will be available for sale a… https://t.co/6q5w5dtFtu
4 days 8 hours ago
TONIGHT! Join @stephanie_heit at @ShopBooksweet for local author's night! https://t.co/pTny5OErDe