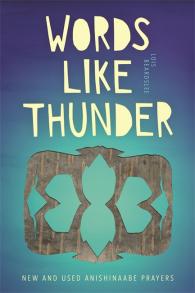 Words like Thunder: New and Used Anishinaabe Prayers is a collection of poetry by award-winning Ojibwe author Lois Beardslee. Much of the book centers around Native people of the Great Lakes but has a universal relevance to modern indigenous people worldwide. Beardslee tackles contemporary topics like climate change and socioeconomic equality with a grace and readability that empowers readers and celebrates the strengths of today’s indigenous peoples. She transforms the mundane into the sacred. Similar in style to Nikki Giovanni, Beardslee might lure in readers with the promise of traditional cultural material, even stereotypes, before quickly pivoting toward a direction of respect for the contemporaneity and adaptability of indigenous people’s tenacious hold on traditions.

Made up of four sections, the book is like a piece of artwork. Parts of the word-canvas are quiet so the reader can rest and other parts lead the reader quickly from one place to another, while always maintaining eye contact. More than anything, Beardslee emphasizes the notion that indigenous peoples are competent and wonderful, worthy of praise, and whose modernity is a function of their survival. She writes unapologetically with a strong ethnic identity as a woman of color who witnessed and experienced community loss of resources that defined her culture. Her stories transcend generations, time, and geographical boundaries—varying in voice between first person or that of her elders or children—resulting in a collective appeal.

Beardslee continues to break the mold and push the boundaries of contemporary Native American poetry and prose. This book will appeal to a general readership, to people who want to learn more about indigenous peoples of the Great Lakes, and to people who care about the environment and socioeconomic equality. Even young readers, especially students of color, will find parts of this book to which they can relate.

Lois Beardslee is an Anishinaabe (Lake Superior Ojibwe, a.k.a. Chippewa Indian) author and illustrator from northwest Lower Michigan. She has won several awards for both writing and civil rights, including ForeWord and IPPY bronze medals and a submission for the Pulitzer. She is the author of several books, including The Women’s Warrior Society.

Beardslee is back with artful prayers in the form of poignant story and poem. Like her own birch bark art, she has chiseled with tooth and nail a human experience in the U.S. that claims more than a moment in history. Words like Thunder defines Lois Beardlee’s literary prowess indefinitely.

– Sheila A. Rocha, chair of performing arts at the Institute of American Indian Arts

‘Our literature is a thin film that wraps itself around us,’ writes Beardslee. For all their fragility these story poems are cause for celebration. They paint a picture of contemporary Anishinaabe life as vivid as the wild berries she conjures for us.

Beardslee’s "New and Used Anishinaabe Prayers" are a rich combination of prose poetry, storytelling, and delights born both of the earth and the ether.

With a text richly packed with facts, tales and voices we all need to know more about, Beardslee slices through categorizations and refreshes truth.

The Abenacki poet and storyteller Joseph Bruchac would frequently end his letters with the phrase, "Walk in Balance." Words of Thunder is a vivid recipe for application of that wish in the present day.

Interview on WGVU's The Morning Show with Shelley Irwin (April 27, 2020)