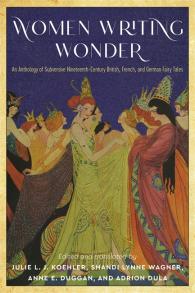 Women Writing Wonder: An Anthology of Subversive Nineteenth-Century British, French, and German Fairy Tales is a translation and critical edition that fills a current gap in fairy-tale scholarship by making accessible texts written by nineteenth-century British, French, and German women authors who used the genre of the fairy tale to address issues such as class, race, and female agency. These shared themes crossed national borders are due to both communication among these writers and changes in nineteenth-century European societies that similarly affected women in Western Europe. In effect, the combined texts reveal a common, transnational tradition of fairy tales by women writers who grapple with gender, sexual, social, and racial issues in a post–French Revolution Europe. The anthology provides insight into the ways the fairy tale served as a vehicle for women writers—often marginalized and excluded from more official or public genres—to engage in very serious debates.

Women Writing Wonder, divided into three parts by country, features tales that depict relationships that cross class and racial divides, thus challenging normative marriage practices; critically examine traditional fairy-tale tropes, such as "happily ever after" and the need for a woman to marry; challenge the perception that fairy-tale collecting, editing, and creation was male work, associated particularly with the Grimms; and demonstrate the role of women in the development of the emerging field of children’s literature and moral tales. Through their tales, these women question, among other issues, the genre of the fairy tale itself, playing with the conventional fairy-tale narrative to compose their proto-feminist tales.

By bringing these tales together, editors and translators Julie L. J. Koehler, Shandi Lynne Wagner, Anne E. Duggan, and Adrion Dula hope both to foreground women writers’ important contributions to the genre and to challenge common assumptions about what a fairy tale is for scholars, students, and general readers.

Julie L. J. Koehler is the coordinator of the Basic German Language Sequence and a lecturer of German at Wayne State University in Detroit. Her most recent publications include "The Persecuted History of Cinderella: A Case for Oral Tradition in Western Europe" in Gramarye and "When the Inexhaustible Purse Runs Dry: Bettina von Arnim’s ‘Tale of the Lucky Purse’" in Marvels & Tales. She is currently working on book project on "Kind and Unkind Girls" tales written by German women in the nineteenth century.

Shandi Lynne Wagner is assistant professor of English literature at Saint Mary-of-the-Woods College. She is author of "Seeds of Subversion in Mary de Morgan’s 'The Seeds of Love'" in Marvels & Tales. She is currently working on a book project that analyzes nineteenth-century British women writers’ use of fairy-tale and folklore motifs in protofeminist literature.

Anne E. Duggan is professor of French at Wayne State University and coeditor of Marvels & Tales: Journal of Fairy-Tale Studies. Author of Salonnières, Furies, and Fairies: The Politics of Gender and Cultural Change in Absolutist France and Queer Enchantments: The Fairy-Tale Cinema of Jacques Demy (Wayne State University Press, 2013), she is also general editor of the six-volume series, A Cultural History of Fairy Tales.

Adrion Dula teaches courses in French and fairy tales at Wayne State University. Her article "B(e)aring the Beast: Deformity, Animality, and the Ableist Gaze in French Literary Variants of ‘Beauty and the Beast’" recently appeared in Marvels & Tales. She is currently translating a collection of fairy tales by the little-known nineteenth-century French writer Julie Delafaye-Bréhier.

This important anthology expands current fairy-tale studies by making mostly unknown tales of nineteenth-century women writers in Britain, France, and Germany accessible to general readers and scholars. Bridging the conteuses of the early modern period and the revisionary feminist writers of our postmodern times, the fairy tales and highly informative essays included in Women Writing Wonder explore the sociopolitical issues such as class, gender equality, and race that engaged these women writers.

Women Writing Wonder is a treasure trove of fascinating stories from nineteenth-century Britain, France, and Germany, sure to delight any reader with an interest in fairy tale or fantasy. This critical anthology debunks the notion that it was a select group of male writers and scholars that revolutionized the genre during the ‘golden age’ of fantasy writing and folklore study. The literary fairy tales collected here demonstrate instead that the genre has long served as a framework for creative, subversive, and often politically engaged writing by women, across national boundaries.

Finally, a wondrous anthology of fairy tales, based on impeccable research, that honors women writing in the nineteenth century. This collection of German, French, and British fairy tales fills a huge historical gap and reveals how exceptional and how neglected female writers were and are. In fact, the nineteenth century was a period in which the fairy tales created by women writers flowered, and these stories can now be rediscovered and given their due appreciation.

Covering the century that cemented the fairy-tale tradition in the Western world, this exciting cross-cultural collection forefronts the inestimable contributions French, German, and English women writers made to the genre. Both the texts and commentaries will challenge conceptions about the history of the fairy tale and its creators.

Once upon the seventeenth century, women wrote tales. Then . . . nothing, until 1960s feminism. Banishing this classic metanarrative from fairyland for good, these editors unearthed a trove of nineteenth-century protofeminist tales. Presented via smart introductions that situate the tales nationally, this lost heritage awaits readers and its moment in the critical spotlight.

– Christine A. Jones, University of Maryland

Delving into forgotten material, much of it previously unpublished in English, Women Writing Wonder is an in-depth study of 19th-century fairy tales from France, Germany and the UK written by women. They present an incredibly rich and diverse collection, but as a whole they take to task not simply the idea that the fairy tale in the 19th century was the domain of men, but also the idea that fairy-tale heroines are, as a collective, passive, self-sacrificing, and marriage-obsessed. With little-known stories from authors such as George Sand, Elizabeth Gaskell and Christina Rossetti, as well as tales from prolific writers of wonder whom history has largely forgotten, the collection is a treasure trove of feminist wonder.

Women Writing Wonder is based on the extraordinary work of an exemplary collective of contemporary female scholars who have opened up new insights into the history and rise of the literary fairy tale, particularly in the nineteenth century.