Home » Books » Women of the Word 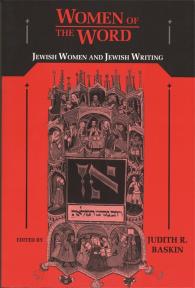 Women of the Word

This collection of essays is a gem.

Jewish women writers of the late nineteenth and early twentieth centuries lived with a sense of painful connection to a culture that rejected their aspirations. Raised in a Jewish environment wary of female aspirations and in a wider world that was only marginally more sympathetic to their ambitions, this diverse group often found that a life devoted to literary expression required sacrifices and painful choices. Writing, however, enabled them to reclaim and explore their Jewish heritage.

Responding to a variety of Jewish women's voices in Hebrew, Yiddish, English, and Spanish, this collection of seventeen essays surveys the achievements of Jewish women writers from the Middle Ages to the present.
Scholars of Jewish literature chronicle the Jewish encounter with modernity and document female strategies for constructing intellectual and emotional identities amidst the competing demands of traditional norms, familial obligations, and economic survival.

The themes of repression and equivocal liberation resonate throughout, as the authors reflect on the silencing of the female voice in a traditional Jewish culture that most often denied women the education and the empowerment requisite for recording their thoughts and feelings. While individual essays reveal literary discoveries of self and forgings of identity by women rising to the opportunities and challenges of drastically altered Jewish social realities, a significant number also show the sad decline of women writers upon whom silence was reimposed. Several chapters consider how Jewish women were depicted by male writers from the Middle Ages through the mid-nineteenth
century. A final essay documents the ways in which memory, testimony, and survival affect the writing of women who survived the Holocaust, a perspective frequently marginalized in studies of Holocaust literature.

Women of the Word is part of an emerging effort to listen to the voices of Jewish women both past and present. Written in a period when Jewish women writers internationally are creating a wealth of diverse literary works, these essays take note of the short time during which Jewish women's writing has flourished and inspire readers with the richness of the literature that such writers have already produced.

Judith R. Baskin is chair of the Department of Judaic Studies at the State University of New York at Albany. The author of Pharaoh's Counsellors: Job, Jethro and Balaam in Rabbinic and Patristic Tradition and the editor of Jewish Women in Historical Perspective, she received her Ph.D. from Yale University.

This collection of essays is a gem. . . the work runs the gamut from multifaceted Jewish feminist concerns to universal concerns bringing this volume far beyond the singular realm of Jewish feminist literary criticism.