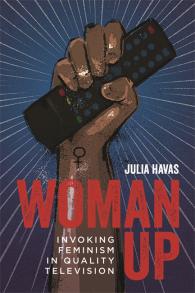 While American television has long relied on a strategic foregrounding of feminist politics to promote certain programming’s cultural value, Woman Up: Invoking Feminism in Quality Television is the first sustained critical analysis of the twenty-first-century resurgence of this tradition. In Woman Up, Julia Havas’scentral argument is that postmillennial "feminist quality television" springs from a rhetorical subversion of the (much-debated) masculine-coded "quality television" culture on the one hand and the dominance of postfeminist popular culture on the other.

Postmillennial quality television culture promotes the idea of aesthetic-generic hierarchies among different types of scripted programming. Its development has facilitated evaluative academic analyses of television texts based on aesthetic merit, producing a corpus of scholarship devoted to pinpointing where value resides in shows considered worthy of discussion. Other strands of television scholarship have criticized this approach for sidestepping the gendered and classed processes of canonization informing the phenomenon. Woman Up intervenes in this debate by reevaluating such approaches and insisting that rather than further fostering or critiquing already prominent processes of canonization, there is a need to interrogate the cultural forces underlying them. Via detailed analyses of four TV programs emerging in the early period of the "feminist quality TV" trend—30 Rock (2006–13), Parks and Recreation (2009–15), The Good Wife (2009–16), and Orange Is the New Black (2013–19)—Woman Up demonstrates that such series mediate their cultural significance by combining formal aesthetic exceptionalism and a politicized rhetoric around a "problematic" postfeminism, thus linking ideals of political and aesthetic value.

Julia Havas is lecturer in media at De Montfort University, Leicester. She has published in the journals Television and New Media and Animation Studies and contributed chapters to the anthologies Hysterical! Women in American Comedy and Binge-watching and Contemporary Television Research. Her research focuses on Anglo-American television, the gender and race politics of popular media, streaming culture, Hungarian film and TV, and the transcultural travel of media.

In the media studies scholarship analyzing the torrent of recent female-centered television, Julia Havas’ book stands out for its rigorous examination of series whose formal experimentation is matched by self-conscious engagement with popular feminism. Her sterling contribution to this literature reminds us how exciting it is to see new feminist research frontiers being mapped and charted.

Julia Havas opens provocative questions about television series like 30 Rock that have been progressive favorites in the postfeminist era. Her savvy insights about marketable feminism and the meanings of "quality" TV will have you re-watching and re-thinking your favorite episodes. Exploring the politics and aesthetics of both television and representations of feminism, Woman Up is an original and refreshing read for fans and scholars alike.

In this essential reading for anyone interested in television studies, Julia Havas spotlights the field’s two most vital approaches: feminism and formalism. Woman Up’s deep dive into recent feminist quality TV theorizes and exemplifies how these critical lenses function optimally in tandem, rather than (all too often) in opposition."

Showing how profoundly and insistently quality television calls on feminist tropes, Woman Up challenges a predominantly masculinist emphasis in scholarly accounts. An evocative reading of feminist quality television, and a powerful engagement with landmark shows, Havas’ book is a vital source for both television and feminist media studies.

– Yvonne Tasker, professor of Media and Communication, University of Leeds

15 hours 19 min ago
Wayne State University President M. Roy Wilson with his teacher in high school. Check out this image and many more… https://t.co/W3kp1D7dFX
1 day 15 hours ago
HAPPY PUB DATE! Dan Gerber said "If you make yourself available to Cindy Hunter Morgan’s poems, they will revivif… https://t.co/L60dTqsUUj
2 days 11 hours ago
Grab your copy or e-book of @fkwang's YOU CANNOT RESIST ME WHEN MY HAIR IS IN BRAIDS today! https://t.co/htFDjNa9yj https://t.co/zHyt049441