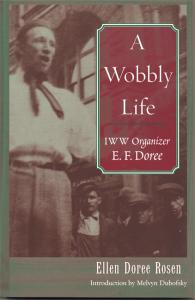 A Wobbly Life is a rare, revealing and wrenching look at the inner life and love of an important labor radical and a timely reminder of the tragic costs of political repression.

Early in the twentieth century, the Wobblies, or Industrial Workers of the World (IWW), fought for the rights of workers—common laborers, migrants, immigrants, black workers—unprotected by the craft unions. In the face of beatings, kidnappings, and lynchings by vigilantes, company detectives, and hired guns, the Wobblies organized in mining and lumber camps, the wheat fields, on docksides and in textile factories. A meteoric career from its beginnings in 1906, the IWW arose with free speech fights, peaked with a membership of over 100,000 workers in 1917, and was devastated in 1918 by the imprisonment of its leadership for violations of wartime legislation. A Wobbly Life helps to set the record straight on the Wobblies during this period of labor history.

A key IWW organizer, union head, writer, and defense committee officer, E. F. Doree experienced all of this first-hand. Seventy-six years after his death, his daughter tells his story through the private letters he wrote, from 1918 to 1922, as one of over a hundred Wobblies imprisoned in Leavenworth Penitentiary. They depict prison life, the comradeship and schisms within the ranks of political prisoners, and the role of civil libertarians—especially the Quakers—in seeking their release. Newspaper clippings, excerpts from the trial transcript, Doree’s depositions about governmental sabotage of the defense effort, and rare photographs supplement the letters.

A personal and dramatic story of front-page significance, A Wobbly Life offers an approachable case study for students of American history, labor history, radicalism, the influence of special interests, and the misuse of government power. Ordinary yet heroic, E. F. Doree’s life and writings provide a view of American labor history that has been glazed over, blotched, and ignored. This book is a tangible and touching story about a man whose life deserves reflection and remembrance.

Ellen Doree Rosen is Professor Emerita at John Jay College of Criminal Justice (The City University of New York). She is author of Improving Public Sector Productivity: Concepts and Practice (Sage Publications, 1993) and co-author of Current Cases in Public Administration (Harper and Row, 1981).

This book is a treasure. Using the letters that her father wrote from federal prison, Eileen Doree Rosen has given us a rare look at the life and loves and dreams and disappointments of an IWW organizer."

A Wobbly Life is a rare, revealing and wrenching look at the inner life and love of an important labor radical and a timely reminder of the tragic costs of political repression."

– David Roediger, University of Illinois, author of Colored White: Transcending the Racial Past