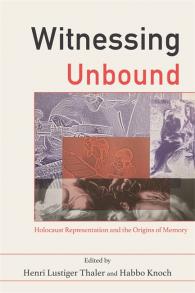 Holocaust Representation and the Origins of Memory

Primary witnessing, in its original forms—from survivor and bystander testimonies, to memoirs and diaries—inform our cultural understanding of the multiple experiences of the Holocaust. Henri Lustiger Thaler and Habbo Knoch look at many of these expressions of primary witnessing in Witnessing Unbound: Holocaust Representation and the Origins of Memory, which is particularly relevant today with the hastening decline of the Holocaust survivor demographic and the cultural spaces for representation it leaves in its wake, in addition to the inevitable and cyclical search for generational relevancy, siphoned through acts of memory.

The essays in Witnessing Unbound are written by some of the leading figures on the theme of witnessing as well as scholars exploring new primary sources of knowledge about the Holocaust and genocide. These include a focus on the victims: the perished and survivors whose discursive worlds are captured in testimonies, diaries, and memoirs; the witnessing of peasant bystanders to the terror; historical religious writing by rabbis during and after the war as a proto memoir for destroyed communities, and the archive as a solitary witness, a constructed memory in the aftermath of a genocide. The experiences showcased and analyzed within this memorializing focus introduce previously unknown voices, and end with reflections on the Belzec Memorial and Museum. One survivor moves hearts with the simple insight, "I died in Auschwitz, but no one knows [sees] it." In counterpoint is a court case with SS General Karl Wolff, who has conveniently forgotten his crimes during the Holocaust. Original experience and its reimagination within contemporary frameworks make sense of an event that continues to adapt and change metaphorically and globally. As one of the contributors writes: "In my mind, the ‘era of the witness’ begins when the historical narrative consists of first-person accounts."

Witnessing Unbound augers in the near completion of that defining era, by introducing a collection of diverse reflections and mediations on witnessing and memory. A must-read for the further understanding of the Holocaust, its cruel reality, and its afterdeath.

Henri Lustiger Thaler is a professor of cultural sociology at Ramapo College of New Jersey. He is the chief curator of the Amud Aish Memorial Museum in New York and series editor of Memory Studies: Global Constellations.

Habbo Knoch is a professor of Modern and Contemporary History at the University of Cologne, Germany. He is the former director of the Bergen-Belsen Memorial Museum. He is the co-editor of Bergen-Belsen.

In this moving and insightful book, readers are reminded that the Holocaust is a subject which is far from exhausted. To the contrary, combining examinations of little-known topics with reexaminations of familiar ones, Witnessing Unbound enjoins us not only to research and to commemorate but to grapple with the terrible inexplicability that remains after all attempts to speak of the Holocaust.

With contributions from some of the leading scholars on the subject of Holocaust testimony, Witnessing Unbound is a marvelous collection that takes up the tension between the witness as tale-teller and the witness as truth-teller. Its contributors take up well-known and previously-unexamined texts, documents, and sites in order to better understand the relation between the living and the dead, those who are here and those who are here no longer.

– Michael Bernard-Donals, professor of English at University of Wisconsin-Madison

The unique approach of Orthodox Jews to the Holocaust finally finds its rightful place. By opening up new sources and approaches, Witnessing Unbound will reshape the study of Holocaust history, memory, and memorialization.

– Barbara Kirshenblatt-Gimblett, chief curator of the Core Exhibition at POLIN Museum of the History of Polish Jews

Through the testimony of survivors of and witnesses to the atrocities, and the work of those who seek them out, the book unveils new insights at a critical moment in the documentation and commemoration of the Holocaust.

Insightful and thought-provoking reading for anyone researching Holocaust memory and witnessing.

17 hours 19 min ago
Hey #movementdetroit fans! WSUPress's TECHNO REBELS is a great way to relive the excitement of @MovementDetroit all… https://t.co/f4nPn8uYj0
1 day 17 hours ago
Check out Cindy Hunter Morgan's new book at https://t.co/o1mzeoKv1M https://t.co/6W9FLg0RLa
2 days 20 hours ago
Wayne State University President M. Roy Wilson with his teacher in high school. Check out this image and many more… https://t.co/W3kp1D7dFX