Home » Books » Without Forgetting the Imam 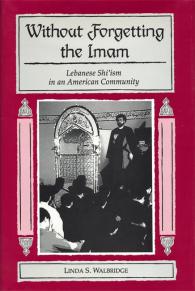 Without Forgetting the Imam

Lebanese Shi’ism in an American Community

Without Forgetting the Imam is an ethnographic study of the religious life of the Lebanese Shi'ites of Dearborn, Michigan, the largest Muslim community outside of the Middle East. Based on four years of fieldwork, this book explores how the Lebanese who have emigrated, most in the past three decades, to the United States, have adapted to their new surroundings. Anthropologist Linda Walbridge delves into the ways in which politics and religion have converged as the Lebanese Shi'i community has remade its identity and accommodated itself to a new environment. She captures a broad picture of religious life within the realm of community living and within the mosques which have proliferated in Dearborn. Walbridge explains how Shi'ites, affected in one way or another by Islamic revivalism, have brought different notions of how their religion should be expressed and carried out in America.

Linda S. Walbridge received her Ph.D. in anthropology from Wayne State University. She is a visiting professor at Indiana University.

16 hours 44 min ago
More on the book here: https://t.co/4k5CJhQV6r
16 hours 45 min ago
🎵TAKE MY BREATH AWAY🎵 Thank you for this great piece, @juliehinds and @freep! Do not miss the virtual book launch… https://t.co/dY6hYjGOlt
16 hours 46 min ago
RT @j_o_rawlins: This Thursday I'll be joining Sean Redmond, @glendud, @VampireSorcha, Alex Wade, and Brenda Weber on zoom to talk T… https://t.co/6Rk4aRhwtX