Home » Books » In the Wilderness with the Red Indians 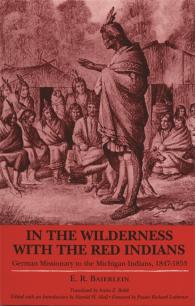 In the Wilderness with the Red Indians

First published in Germany in 1889, E. R. Baierlein's sensitive and respectful portrayal of Native American life is available for the first time in English. In the Wilderness with the Red Indians is a moving historical account of a Lutheran missionary's life with American Indians in central lower Michigan more than a century ago. The book tells of Baierlein 's time in Bethany, Michigan, where he was sent to help establish a church, build homes, and educate both the children of Native Americans and of German Lutherans who had migrated to North America. He and his wife lived as the only whites in an Indian settlement and became loved and trusted members of the tribe. With the assistance of Chief Bemassikeh, a visionary who saw the Indians' way of life was doomed, Baierlein imparted his knowledge to a people eager to learn. His story will be treasured by all readers interested in Michigan history.