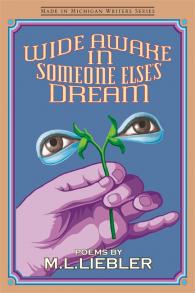 “M. L. Liebler has more poetry, more passion (and compassion), more spirit, more fire in his little left finger than most other poets can muster or steal in a lifetime. His poems are intensely alive, readable (a lot of poetry is not!), and true.”

Wide Awake in Someone Else’s Dream is a collection of traveling poems written in Russia, Israel, Germany, and China that take the reader on a contemplative journey through both the geography of these countries and their cultures as well as through the inward mind of the narrator. As Liebler travels the world, he wrestles with themes of self-discovery, spirituality, identity, and change, and renders poems in his signature raw and defiant style. Thoughtful and direct, these poems look toward beauty and contemplation in a bitter world that has become fraught with mistrust and misunderstanding.

Wide Awake in Someone Else’s Dream is divided into four sections, the first three of which are set in specific locales—Russia, Germany, and Jerusalem. The final section is not limited to a single geographic location but still finds Liebler traveling through different lands and the resultant emotions of dislocation, alienation, and vulnerability that his surroundings provoke. Throughout this collection Liebler’s poems touch on issues of political upheaval, exploitation, and corruption and look at the personal and spiritual transformation left in their wake. This ability to give readers a glimpse of a bleak global reality translated by a hopeful eye has earned Liebler’s poems comparisons to the richly imagistic and spiritual work of George Trakl.

In all, this collection is characterized by its calm and powerful voice, which has a musical sensibility in its spare and straightforward presentation. Fans of Liebler’s work and general readers of poetry will enjoy Wide Awake in Someone Else’s Dream.

M. L. Liebler is on the faculty of the department of English at Wayne State University and is the author of several books of poetry, including The Moon a Box, Written in Rain: New and Selected Poems, 1985–2000, and Stripping the Adult Century Bare: New and Selected Writings. He is the director of Springfed Arts: Metro Detroit Writers Literary Arts Organization.

When M. L. Liebler scrawls, types, speaks, or sings the blues, our whole unseen world shakes. Poetry, the original human language, races back like 'blood in the moon tonight.'... The ineffable power of human utterance-full of feeling, full of skill-can't be stopped. Liebler's arrow aims at more than the heart and mind. Like Lazarus, he drifts to tell us how much we need one another, how lonely we labor in our TV, CD, DVD, LED, iPod, satellite caves, 'filling the blue ancient Chinese night,' the Michigan night, and 'all the wars we fight in our sleep.'

M. L. Liebler has more poetry, more passion (and compassion), more spirit, more fire in his little left finger than most other poets can muster or steal in a lifetime. His poems are intensely alive, readable (a lot of poetry is not!), and true.

– Thomas Lux, author of The Cradle Place and The Street of Clocks

Once again, in Wide Awake in Someone Else's Dream, M. L. Liebler has demonstrated what a marvelous and sensitive poet he is. This collection is so multifaceted that it is difficult to describe. On the surface, most of the poems are about places, each significant in its own way. On a deeper level, they are a personal and wonderfully lyrical search for self, wholeness, and meaning, a tension between dream and reality. I love this collection. I am drawn back to each poem over and over, each reading revealing something new.