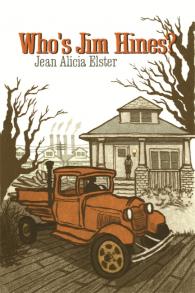 A lively and engaging story that is steeped in history but cleverly weaves in universal elements of family, father-son relationships, boyhood friendships, and life's challenges.

Who’s Jim Hines? is a story based on real events about Douglas Ford Jr., a twelve-year-old African American boy growing up in Detroit in the 1930s. Doug’s father owns the Douglas Ford Wood Company, and Doug usually helps his dad around the scrap wood yard located in the side lot next to their house. But after Doug loses his school textbooks one day he is faced with the prospect of paying for new books and must join his father in the backbreaking work of delivering wood throughout the city and suburbs. Doug, who knows all of his father’s delivery drivers, takes this opportunity to unravel the mystery of a man named Jim Hines whom he always hears about but has never seen. In discovering Hines’s identity, Doug also learns much about the realities of racism in Depression-era Detroit.

Readers from the ages of eight through twelve will enjoy the entertaining and educational story in Who’s Jim Hines?

Jean Alicia Elster is a professional writer of fiction for children and young adults. She is the granddaughter of Douglas and Maber (May) Jackson Ford, whose family story is the basis of The Colored Car. Her other books include Who's Jim Hines? (Wayne State University Press, 2008), which was selected as a Michigan Notable Book and a ForeWord Book of the Year finalist; I'll Do the Right Thing; I'll Fly My Own Plane; I Have a Dream, Too!; and Just Call Me Joe Joe.

A lively and engaging story that is steeped in history but cleverly weaves in universal elements of family, father-son relationships, boyhood friendships, and life's challenges."

It's a book about a black family in Detroit in the 1920s and '30s. But it's also the story of the triumph of hope over fear, of dreams over hard realities."

JEAN ALICIA ELSTER from Kresge Arts in Detroit on Vimeo.