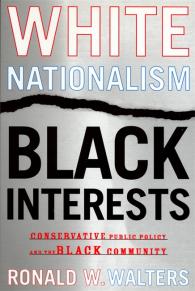 It is a work without peer and as a book it will turn heads. This will be an engaging work for both students and faculty and the lay reader.

The rise of the Conservative movement in the United States over the last two decades is evident in current public policy, including the passage of the Welfare Reform Act, the weakening of affirmative action, and the approval of educational vouchers for private schooling. At the same time, new rules on congressional redistricting prohibit legislators from constructing majority black congressional districts, and blacks continue to suffer disproportionate rates of incarceration and death-penalty sentencing. In this significant new study, the distinguished political scientist Ronald W. Walters argues that the Conservative movement during this period has had an inordinate impact on American governing institutions and that a strong, though very often unstated, racial hostility drives the public policies put forth by Conservative politicians.

Walters traces the emergence of what he calls a new White Nationalism, showing how it fuels the Conservative movement, invades the public discourse, and generates policies that protect the interests of white voters at the expense of blacks and other nonwhites. Using historical and contemporary examples of White Nationalist policy, as well as empirical public opinion data, Walters demonstrates the degree to which this ideology exists among white voters and the negative impact of its policies on the black community. White Nationalism, Black Interests terms the current period a "second Reconstruction," comparing the racial dynamics in the post-Civil Rights era to those of the first Reconstruction following the end of the Civil War. Walters's analysis of contemporary racial politics is uniquely valuable to scholars and lay readers alike and is sure to spark further public debate.

Ronald William Walters (1938-2010) was Distinguished Leadership Scholar in the Academy of Leadership, director of the African American Leadership Institute, and professor of government and politics at the University of Maryland College Park.

W. E. B. Du Bois predicted a century ago that the problem of the twentieth century was the 'color line.' In this brilliant and provocative study, noted political scientist Ronald Walters illustrates how America's color line- structural racism -has fundamentally shaped U.S. political culture. White Nationalism, Black Interests explains how and why white racism continues to play a central role in the setting of public policy and governmental priorities. Richly documented and well argued, White Nationalism, Black Interests is an extraordinary accomplishment in the field of black politics.

Overall the author has produced a bold and innovative work which will significantly enhance and enrich and enliven the current public dialogue and debate raging in American politics over the partisan directions which the country should take in both domestic and foreign affairs. The manuscript offers a very novel concept, uniquely defined and formulated, that is embedded in a theory of partisan convergence, with evidence and support generated from some 4 different public policy areas surrounding the African American community and creatively interpreted in the context of Black Politics. Such features and characteristics make this manuscript a unique and original piece of scholarship. It is a work without peer and as a book it will turn heads. This will be an engaging work for both students and faculty and the lay reader.

With courage and skill Walters identifies and analyzes the resurgence of conservatism in America for what it is-the coming to power of a radical white ethnic nationalist movement that seeks to maintain the existing racial hierarchy in the midst of widespread demographic, economic, social and cultural changes."