Home » Books » Where the Boys Are 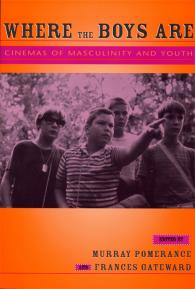 Where the Boys Are

Cinemas of Masculinity and Youth

What makes Where the Boys Are so worthwhile is the picture it gives us of the global male teenager--boys from the South Bronx to Scotland revealed in all their heartless, heartbreaking glory.

The development of young masculine sexuality is still a cultural taboo of sorts, and until now there has been little scholarship available that discusses aspects of boyhood and its relation to cinema—in particular, the process whereby masculinities are socially, historically, economically, aesthetically, and psychologically created in male coming-of-age as depicted onscreen. Where the Boys Are: Cinemas of Masculinity and Youth scrutinizes a broad corpus of films about boyhood within a cross-genre, trans-historical, cross-authorial, and cross-cultural framework. Unlike the filmic investigations before it, this book is not restricted to examining boys as agents of violence, aggression, and withdrawal; or as routinely glossed agents of romance or victims of comedic ridicule.

Where the Boys Are is divided into three sections: Archetypes and Facades includes essays that examine historically central typifications of boyhood, the most accessible categories for seeing and understanding boy characters; essays in Bonds and Beautifications analyze the ways boys establish images of themselves and identify with one another in affiliation or love; and essays in Struggles and Redefinitions explore the way boys are depicted in film as aligning themselves in relation to people, forces, ideas, and situations. Using the most current and diverse critical methods, Where the Boys Are is a crucial resource for film scholars and students at any level, and is also the perfect companion to Gateward and Pomerance’s Sugar, Spice, and Everything Nice: Cinemas of Girlhood (Wayne State University Press, 2002).

Frances Gateward teaches courses on film and popular culture in the unit for cinema studies at the University of Illinois Urbana-Champaign. She is co-editor with Murray Pomerance of Sugar, Spice, and Everything Nice: Cinemas of Girlhood (Wayne State University Press, 2002) and also the editor of Zhang Yimou: Interviews (University Press of Mississippi, 2001).

[A] fine collection of essays exhibiting first-rate scholarly work. . . . Where the Boys Are will be of interest to film scholars as well as graduate students interested in film, criticism, contemporary culture, and gender studies."

By exploring screen representations of boys, this ambitious collection addresses a little-researched area in gender studies. Given cinema's fascination with boyhood, what does the coming-of-age narrative reveal about the process of becoming a man? The anthology approaches this question in an admirably multifaceted way, analyzing films from different historical eras and nations with attention to the issues of race, ethnicity, and sexuality that make portraits of boyhood so complex and so important to studies of masculinity.

As the originality, richness, and diversity of the films treated and the perspectives elaborated testify, Where the Boys Are makes an important contribution, applying recent advances in cultural studies and feminist methodology to a corpus that has not received systematic scrutiny."

This sprawling collection of essays does well to focus our attention on the range of tough guys, fat boys, and chronic masturbators that populate the contemporary teen film. What makes Where the Boys Are so worthwhile is the picture it gives us of the global male teenager--boys from the South Bronx to Scotland revealed in all their heartless, heartbreaking glory.