Home » Books » When You're Up to Your Ass in Alligators 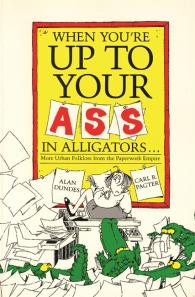 When You're Up to Your Ass in Alligators

Office copier folklore—those tattered sheets of cartoons, mottoes, zany poems, defiant sayings, parodies, and crude jokes that regularly circulate in office buildings everywhere—is the subject of this innovative study. this type of folklore represents a major form of tradition in modern America, and the authors have compiled this raw data for scholarship—and entertainment. These creations of the Paperwork Empire comment on topics and problems that concern all urban Americans. No one and nothing escapes their raunchy wit and sarcasm. Bosses, ethnic groups, minorities, the sexes, alternative lifestyles, politics, welfare, government workers, the law, bureaucracy, and even "The Night Before Christmas" all come under fire to form a biting, and hilarious, commentary on modern American society.

Carl R. Pagter is a practicing attorney in California.

3 hours 5 min ago
Wayne State University President M. Roy Wilson with his teacher in high school. Check out this image and many more… https://t.co/W3kp1D7dFX
1 day 3 hours ago
HAPPY PUB DATE! Dan Gerber said "If you make yourself available to Cindy Hunter Morgan’s poems, they will revivif… https://t.co/L60dTqsUUj
1 day 23 hours ago
Grab your copy or e-book of @fkwang's YOU CANNOT RESIST ME WHEN MY HAIR IS IN BRAIDS today! https://t.co/htFDjNa9yj https://t.co/zHyt049441