Home » Books » When You Come Home 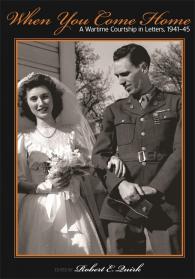 When You Come Home

When You Come Home is a unique collection that combines World War II experiences with engaging personal material and valuable social and cultural history. It is rare to have such thoughtful letters from the home front to the soldier.”

Robert E. Quirk and his future wife, Marianne, were both Wayne State University students when they met and fell in love in 1941, but they were quickly parted when Quirk was drafted. Decades after their marriage and the end of the war, Quirk shares the letters they exchanged during World War II.

The letters in When You Come Home paint a vivid picture of the couple’s growing personal relationship alongside the politics of wartime, both overseas and on the homefront. As Quirk writes of combat in France and details reactions abroad to the bombing of Pearl Harbor, Marianne describes the impact of these events back in Detroit. When You Come Home also reveals personal glimpses of life in the 1940s, as the two exchange everyday stories about their families and the cities they live in and visit, about their studies at Wayne State, and about their jobs.

Quirk’s letters are presented along with commentary about his experiences at the time, giving the letters additional context and meaning. This volume also includes a foreword by former Detroit Free Press publisher Neal Shine.

For readers curious about day-to-day life during World War II, When You Come Home will be a fascinating and personal glimpse into the time period.

When You Come Home is a unique collection that combines World War II experiences with engaging personal material and valuable social and cultural history. It is rare to have such thoughtful letters from the home front to the soldier."

Robert E. Quirk has created a living, moving account of World War II as experienced through the lives of two young people about to start a life together. The letters that form the basis for this book are loving, well-written, and detailed, but it is Quirk's reconstruction of the context for those letters, whether in Detroit, on the national level, or in the theaters of war, that makes When You Come Home substantial."

– Joe Grimm, recruiting and development editor at the Detroit Free Press and editor of Songquest: The Journals of Great Lakes Folklorist Ivan H. Walton and Windjammers: Songs of the Great Lakes Sailors

Before he could marry his sweetheart, Quirk was whisked off into the service for World War II. The carefully preserved correspondence between him and his future wife here tells the story of a Detroit GI fighting the Axis powers, with home front insights from his Dearborn sweetheart. Trace their budding romance, follow wartime events and mourn the lost art of letter-writing."