Home » Books » When Our Fathers Return to Us as Birds 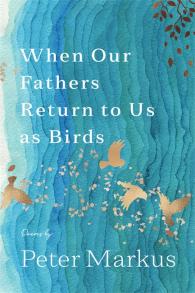 Over the course of two decades and six books, Peter Markus has been making fiction out of a lexicon shaped by the words brother and fish and mud. In an essay on Markus’s work, Brian Evenson writes, "If it’s not clear by now, Markus’s use of English is quite unique. It is instead a sort of ritual speech, an almost religious invocation in which words themselves, through repetition, acquire a magic or power that revives the simpler, blunter world of childhood." Now, in his debut book of poems, When Our Fathers Return to Us as Birds, Markus tunes his eye and ear toward a new world, a world where father is the new brother, a world where the father’s slow dying and eventual death leads Markus, the son, to take a walk outside to "meet my shadow in the deepening shade."

In this collection, a son is simultaneously caring for his father, losing his father, and finding his dead father in the trees and the water and the sky. He finds solace in the birds and in the river that runs between his house and his parents’ house, with its view of the shut-down steel mill on the river's other side, now in the process of being torn down. The book is steadily punctuated by this recurring sentence that the son wakes up to each day: My father is dying in a house across the river. The rhythmic and recursive nature to these poems places the reader right alongside the son as he navigates his journey of mourning.

These are poems written in conversation with the poems of Jack Gilbert, Linda Gregg, Jim Harrison, Jane Kenyon, Raymond Carver, Theodore Roethke too—poets whose poems at times taught Markus how to speak. "In a dark time . . .," we often hear it said, "there are no words." But the truth is, there are always words. Sometimes our words are all we have to hold onto, to help us see through the darkened woods and muddy waters, times when the ear begins to listen, the eye begins to see, and the mouth, the body, and the heart, in chorus, begin to speak. Fans of Markus’s work and all of those who are caring for dying parents or grieving their loss will find comfort, kinship, and appreciation in this honest and beautiful collection.

Peter Markus is the author of six books of fiction, including The Fish and the Not Fish, which was named a Michigan Notable Book in 2015, and co-editor with Terry Blackhawk of To Light a Fire: 20 Years with the InsideOut Literary Arts Project (Wayne State University Press, 2015). Markus is the senior writer with InsideOut Literary Arts and is on the faculty at Oakland University, where he teaches creative writing. In 2012 he received a Kresge Arts in Detroit fellowship in Literary Arts.

Peter Markus is on fire in these poems, some holy spirit hovering over him while he’s talking in the tongues of grief. The poems turn into each other effortlessly—echoing, resonating, repeating, like waves rolling in, each containing a distinct mixture of both old water and new. He builds each poem around a series of his obsessively recurring images, as if these things need to be held close and continually examined in an attempt to come to terms with the multiple levels of loss, as if he is creating his own language to articulate that loss, a language he teaches us, punctuated with his touchstones—fish, birds, river, boat, steel mill, and others—until we too are left in silent wonder and awe watching him shave his dead father’s face with solemn grace.

Only in the transformative blaze of language this lucid, brave, and visionary, can we look through the thin flesh of a dying father and see a bird on a branch ready to fly, can we hear the songs of the gone: everywhere, alive, in river and air. In this astonishing collection, Peter Markus gives grief wings and current, gills and wind. Breathing into the glowing bones of these poems, I feel the momentary resurrection of being imperishable. And I am reminded how to live.

– Robert Fanning, author of Severance and Our Sudden Museum

The poems in Peter Markus’s When Our Fathers Return to Us as Birds offer a potent, ‘momentary resurrection’ of father, river, bird—the swirling undertow of what is passing or has passed. Poetry here charts the struggle of grief and devotion within an encroached-upon Michigan landscape. Indeed, poetry is the lone footbridge between the present and the past, the living and the dead. I admire the depth of Markus’s seeing and the emotional courage of this collection.

In one of the most luminous and helpful collections of mourning poetry I’ve read, Markus writes of his father’s death with emotional authenticity, wisdom, grace, and casual artistry. These masterful, unassuming poems offer trustworthy company in ‘a sorrow / we choose not to talk too much about,’ which is when we need it most.

– Jonathan Johnson, author of The Desk on the Sea (Wayne State University Press, 2019) and May Is an Island

Our fathers do indeed return as birds, as Peter Markus tells us: poem-birds, that is, flown in on a trusted voice, anointed by necessary journeys, consoled and guided by a beloved river, alive with the sacrament called ‘I remember. . . .’ And they anoint us in return—their readers, who read, gratefully, by the strength of their light.

For decades, Peter Markus has been rendering mud and fish into stars and sky. For decades, he has been focused on the granular beauty of the poem in every sentence, the universe of each word. In When Our Fathers Return to Us as Birds, his heart is somehow open even wider, giving over his own father to the mud and fish and stars and sky, to the birds, mourning as only Peter Markus can, with a river of words.

These poems are heart-voiced and impressed with an intelligence unique only to Markus. Reading each one is a healing process for men grieving over lost fathers.

The poems herein are the calls of birds, some sung with great joy in recollection of the kinship between father and son, some sung in sorrow and reflection upon a father’s affliction, but all with the clarity of the cup of water the son will fetch from the river to anoint the body. And while the father is held captive in his house on the river, bound there by his infirmity, the cadence of life in the natural world continues—the ‘swans on their way to somewhere else,’ the pike ‘knifing its long narrow body though the light green murk,’ and ‘the doe and her two fawns crossing the road.’ So walk now with Peter Markus as he takes us away through field and wood, through cattail marsh and riverbank mud, to the sick-bed where the father lies, and even onward to the crematorium flames from which smoke ascends as birds might rise ‘toward that window we call sky.’

In When Our Fathers Return to Us as Birds, Peter Markus has written an authentic and powerful rite of a book. It’s a tribal book, and the tribe is the Living: a humanity, bound by a shared mortality, to honor the dead. That obligation, also known as grief, requires language, gods, myths, visitations, and Markus invents them all afresh in this deeply felt, memorable book.

Those of us who live around here refer to Peter Markus’s country as ‘Down River,’ that run of the Detroit River south of the city that passes factories, steel mills, and power plants until it arrives at Lake Erie. It takes a while to learn to love this country. But Peter Markus’s people have lived and died here for a long time. When he is shattered and exhausted by grief, as he is in this gut-wrenching collection of poems about the illness and death of his father, Pete can turn to the river and the birds that migrate along it, for consolation. And he finds it there, though it is hard earned consolation, never easy. This collection of clear and powerfully unadorned poems will make you weep, even if you don’t know the river, because you, too, know the pain of loss. If you, too, have learned to love Peter Markus’s country, When Our Fathers Return to Us as Birds will fill your imagination, first overwhelming you, then remaining with you for days and weeks.

Walk the river with Peter Markus in his daily homage to his father. Take in the levees, the fish, the abandoned steel mill, the birds, the river air his father will no longer breathe—all rendered with steady wonder and ‘the clarity that death brings.’ And take comfort. Rather than ‘let silence have its way with grief,’ Markus gives us—in poems as translucent as the clearest river water—'no better way to say goodbye.’

Every line is a revelation in the form of plain truth. The world of these poems plunges us into the river of what matters most: life and death, nature and ruin, hope and despair. Here is a poet who can transform the simplest elements into shimmering, heartbreaking beauty. If Leonard Cohen and Ernest Hemingway had a conversation in heaven, it would be this book.

– Liesel Litzenburger, author of Now You Love Me and The Widower

Reminiscent of Jack Gilbert, Marie Howe and Sharon Olds — with this collection, Markus brings the reader in and walks them through some of the darkest moments of his life. In doing so, he shines a light that both the living and the dead can see.

Markus’s When Our Fathers Return to Us as Birds is openhearted in its exploration of grief, bold in its hope that there may be some form of living after death, and realistic in admitting that "no one can prepare / you for how we leave the world" (19). In its poems, the living bury the dead the best they can. The speaker admits, "We did what we could / when we could. Which was always not enough" (52). Yet these poems together feel like more than enough, like buoys in a channel to mark our way.