Home » Books » When Lions Were Kings 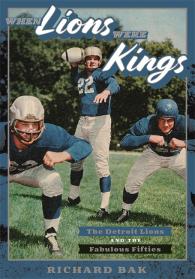 When Lions Were Kings

The Detroit Lions and the Fabulous Fifties

During the 1950s, the Detroit Lions were one of the most glamorous and successful teams in the National Football League, winning championships in 1952, 1953, and 1957, and regularly playing before packed houses at Briggs Stadium. In When Lions Were Kings: The Detroit Lions and the Fabulous Fifties, journalist and sports historian Richard Bak blends a deeply researched and richly written narrative with many rare color images from the decade, re-creating a time when the Motor City and its gridiron heroes were riding high in the saddle.

Representing a city at its postwar peak of population and influence, coach Raymond "Buddy" Parker and such players as Les Bingaman, Bob "Hunchy" Hoernschemeyer, Yale Lary, Joe Schmidt, Jack Christiansen, Jim Doran, Lou Creekmur, and Leon Hart helped sell the game to a country discovering the joys of watching televised football on Sunday afternoons and Thanksgiving Day. Quarterback Bobby Layne and halfback Doak Walker were celebrity athletes during this golden age of pro football—a decade when the game first started to replace its slower-paced cousin, baseball, as the national pastime. While the quietly modest Walker was a darling of Madison Avenue advertisers, the swaggering Layne became the first NFL player ever to grace the cover of Time magazine. Along with detailed profiles of the players, coaches, and games that defined the Lions’ only dynastic era, Bak explores such varied topics as the team’s languid approach to desegregation, the wild popularity of bubble gum trading cards, and the staggering physical cost players of the period have suffered in retirement.

When Lions Were Kings is a lively portrait of the golden age of professional football in Detroit that will delight younger fans and inform die-hard followers of one of the NFL’s oldest franchises.

Richard Bak was born and raised in Detroit and is a graduate of Eastern Michigan University. His books include Peach: Ty Cobb in His Time and Ours and A Place for Summer: A Narrative History of Tiger Stadium (Wayne State University Press, 1998). He is a member of the Society for American Baseball Research and the Professional Football Researchers Association.

Thanks to Bak’s research and storytelling, When Lions Were Kings is a tremendous read. In addition to describing the Lions’ exploits during their most spectacular decade, Bak provides an enormous amount of interesting detail on fans, wives, girlfriends, mascots, water boys, night clubs, and Detroit itself. He’s written a cultural history as well as a football history.

A well-written and well-researched book on the Detroit Lions of the 1950s. They were arguably the best team of that decade, rivaling the Cleveland Browns. Bak goes into great detail on players of that era, giving unique insight into the team. I highly recommend this book.

At long last, Richard Bak has provided us with a definitive and colorful retrospective of the Detroit Lions in their decade of dominance. You’ll thank him for placing readers inside Briggs Stadium to watch Bobby Layne, Doak Walker, Joe Schmidt, Yale Lary, and a cast of characters march up and down the field to gridiron glory.

A much-needed blast from the past that talks about one of the most successful dynasties in team sports history — that thought alone might give Lions fans hope that a once incredible past could maybe turn into a very real future.

Richard Bak's When The Lions Were Kings is a look at an era of pro football in Detroit that has only rarely been duplicated by other city's teams. Bak's ability to weave local history, landmarks, and social events into the story of a dynasty that could have been far better than it actually was is remarkable. There are no other books about Detroit's four major sports teams that capture an era of greatness such as the Lions experienced in the 1950s.

A word must be said about the care and beauty that went into the design and production of this book. From page layout, cover design, artwork, and the selection of paper this is a championship effort.

A story of pigskin passion for sports fans of all ages.

Whether you remember those Lions teams of the 1950s or not, this book is required reading for every fan of the Detroit Lions. It will remind you that there was a time when the Detroit Lions really were the kings of the NFL.