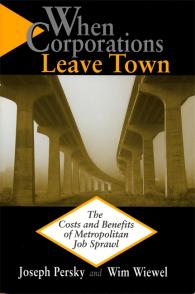 The Costs and Benefits of Metropolitan Job Sprawl

New suburban communities have sprung up all over America, while industrial plants and other commercial districts in the inner city have been left to decay. Nowhere is this more evident that the midwestern United States, where newly formed communities have funneled jobs and income from the inner city. Generally known as sprawl, the problem is particularly acute in those metropolitan areas where deconcentration is taking place—decline in the central city coupled with suburban growth. This process creates benefits in the sububrs, but also increasingly poses costs in the form of congestion and increased infrastructure costs. When Corporations Leave Town analyzes and develops a consistent and comprehensive cost-benefit analysis of employment deconcentration, focussing on central cities and their suburbs.

Sprawl and deconcentration have become big issues in Vice President Albert Gore’s presidential campaign, and are the subject of a growing number of policy initiatives, conferences, and research efforts by organizing such as the Urban Land Institute, the National Homebuilders Association, and the Brookings Institute. Joseph Persky and Wim Wiewel compare the costs and benefits of a firm's locating in the central city with locating in the suburbs. They use a hypothetical model of a large manufacturing plant and a business services office in the Chicago metropolitan area to calculate tangible and intangible costs such as population and traffic congestion, air pollution, housing abandonment, loss of farmland, tax liabilities, and the strain put on suburban public resources. Persky and Wiewel then explore a broad range of public policies advocated for reversing or mitigating metropolitan deconcentration.

Joseph Persky is a professor of economics at the University of Illinois at Chicago.

Wim Wiewel is dean and professor at the College of Urban Planning and Public Affairs at the University of Illinois at Chicago.

3 hours 56 min ago
HAPPY PUB DATE! Dan Gerber said "If you make yourself available to Cindy Hunter Morgan’s poems, they will revivif… https://t.co/L60dTqsUUj
23 hours 55 min ago
Grab your copy or e-book of @fkwang's YOU CANNOT RESIST ME WHEN MY HAIR IS IN BRAIDS today! https://t.co/htFDjNa9yj https://t.co/zHyt049441
4 days 2 hours ago
Wayne State University Press is proud to announce our winner and finalists of the 2022 Next Generation Indie Book A… https://t.co/Ozy1WEQY1i