Home » Books » What the Wine-Sellers Buy Plus Three 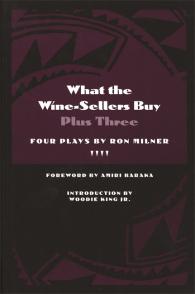 What the Wine-Sellers Buy Plus Three

Ron Milner, a native Detroit writer, is one of the most produced and highly respected African American playwrights. Since the 1960s his works have become staples of African American theaters around the country

A collection of four plays by contemporary playwright, screenwriter, and director Ron Milner. Much of Black literature from the 1940s through the 1960s deals with the search for identity and asks the question, Should Blacks define themselves in relationship to white people and white culture? In dramatizing the struggles and desires of the Black working class and lower middle class, renowned Detroit playwright Ron Milner responds to this question by letting Black culture - Black music in particular - be not only his subject but part of his form of expression and way of being in the world.

The four Milner plays collected here - Checkmates, What the Wine-Sellers Buy, Jazz-Set, and Urban Transition - are characterized by their attention to African American social and psychological culture. Checkmates (1990) explores the relationships of two Black couples who are generations apart in age and attitudes - one new at the games and realities of love, the other experienced. What the Wine-Sellers Buy (1974), a coming-of-age tale set on Detroit streets in the 1950s, looks at the conflict between the lure of the streets and a mother's teachings. The highly innovative Jazz-Set is Milner's tribute to jazz - a play that works like a jazz composition, where the musicians and music are one and characters' life experiences and memories are "played" as music. Urban Transition (1995) picks up on themes introduced in What the Wine-Sellers Buy to examine how the drug subculture has made its way into current mainstream culture. Ron Milner is one of America's most prolific and foremost playwrights. His plays have become required texts in many of the emerging repertory theaters of the Black and progressive theater communities.

Four Plays will be of interest to students of the theater, theater scholars, and those interested in African American and American literature.

Ron Milner is a playwriter, screenwriter, and director who lives in Detroit, Michigan.

Ron Milner, a native Detroit writer, is one of the most produced and highly respected African American playwrights. Since the 1960s his works have become staples of African American theaters around the country

Detroit is to the Black Theater movement what New Orleans is to jazz, because of the contributions of three men: Lloyd Richards; Woodie King; and Ron Milner.

– August Wilson, was an American playwright

2 days 25 min ago
Now a National Jewish Book Award Finalist! @JewishBook https://t.co/qTKAeUEPVX
2 days 3 hours ago
RT @Steph_Steinberg: Tomorrow @ 7 p.m.! Join me and @DETWritingRoom at The Whitney for our first #2023AuthorSeries event ft. @waynestate… https://t.co/pssbi2NLNs
6 days 5 hours ago
SAVE THE DATE! Join author Desiree Cooper and illustrator Bec Sloane this Saturday for a behind the scenes look at… https://t.co/cKDBmbewOa