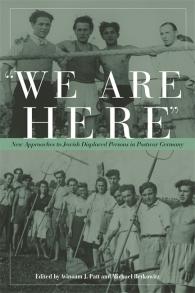 This volume presents state of the art research on displaced persons in postwar Germany. I have hardly seen a collection of essays that so clearly fulfills its purpose in providing first-rate scholarship based on new archival findings.

By the spring of 1947, less than two years after Nazi Germany’s defeat, some 250,000 Jewish refugees remained in the displaced persons camps of Germany, Italy, and Austria. Yet many Jews did not know whether to return to their home countries or move on to someplace else. As a result, these stateless displaced persons (DPs) created a unique space for political, cultural, and social rebirth that was tempered by the complications of overcoming recent trauma. In "We Are Here," editors Avinoam J. Patt and Michael Berkowitz present current research on DPs between the end of the war and the creation of the State of Israel in order to present a more complete and nuanced picture of the DP experience, challenging many earlier assumptions about this group.

Contributors to this volume analyze art, music, and literature of the DPs, as well as historical records of specific DP communities to explore the first reactions of survivors to liberation and their understanding of place in the context of postwar Germany and in Europe more generally. A number of the contributions in this volume challenge prior interpretations of Jewish DPs and Holocaust survivors, including the supposedly unified background of the DP population, the notion of a general reluctance to confront the past, the idea of Zionism as an inevitable success after the war, and the suggestion that Jews, despite their presence in Germany, strenuously avoided contact with Germans. Far from constituting a monolithic whole, then, "We Are Here" demonstrates that the DPs were composed of diverse groups with disparate wartime experiences.

Responding to burgeoning scholarship on DPs and related issues, "We Are Here" sifts through the copious records DPs left behind to shed light on the many facets of a vibrant DP society. Scholars of the Holocaust and all readers concerned with the Jewish experience immediately after World War II will be grateful for this volume.

Avinoam J. Patt is the Philip D. Feltman Professor of Modern Jewish History at the Maurice Greenberg Center for Judaic Studies at the University of Hartford, where he is also director of the George and Lottie Sherman Museum of Jewish Civilization. He is author of Finding Home and Homeland: Jewish Youth and Zionism in the Aftermath of the Holocaust (Wayne State University Press, 2009).

Michael Berkowitz is professor of modern Jewish history at University College London. He is author of The Crime of My Very Existence: Nazism and the Myth of Jewish Criminality; The Jewish Self Image: American and British Perspectives, 1881–1939; Western Jewry and the Zionist Project, 1914–1933; and Zionist Culture and West European Jewry before the First World War. He is also editor or co-editor of three previous volumes, most recently Fighting Back: Jewish and Black Boxers in Britain, with Ruti Ungar.

This volume presents state of the art research on displaced persons in postwar Germany. I have hardly seen a collection of essays that so clearly fulfills its purpose in providing first-rate scholarship based on new archival findings."

'We Are Here': this strong assumption, most of the time stated in Yiddish, taken from Hirsch Glik’s partisan theme, is frequently used in the literature about Jewish Displaced Persons in Europe. It is often understood, without questioning, as an assertion of life. 'We Are Here' meaning 'We are alive, we survived.' It is this provocative and understudied topic that is the theme of this edited book, originating from a two-week workshop organised at the Centre for Advanced Holocaust Studies of the United States Holocaust Memorial Museum in Washington. The topic of Jewish Displaced Persons is not a new one in the growing field of "Aftermath of the Holocaust" studies, but this fascinating volume brings together the newest research and sheds new light on those very specific camps.