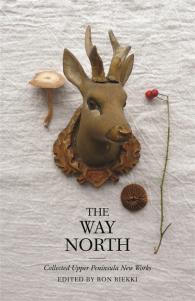 Open most any page of this book and you'll smell the piney air and feel even in the sunlight the clean, steely, visceral cold.

In 49 poems and 20 stories-diverse in form, length, and content-readers are introduced to the unmistakable terrain and characters of the U.P. The book not only showcases the snow, small towns, and idiosyncratic characters that readers might expect but also introduces unexpected regions and voices. From the powerful powwow in Baraga of April Lindala's "For the Healing of All Women" to the sex-charged basement in Stambaugh of Chad Faries's "Hotel Stambaugh: Michigan, 1977" to the splendor found between Newberry and Paradise in Joseph D. Haske's "Tahquamenon," readers will delight in discovering the work of both new and established authors. The contributors range widely in age, gender, and background, as The Way North highlights the work of established writers, teachers, students, laborers, fishermen, housewives, and many others.

The Way North brings the U.P.'s literary tradition to the awareness of more readers and showcases some of the most compelling work connected to the area. It will be welcomed by readers interested in new fiction and poetry and instructors of courses on Michigan writing.

Ron Riekki was born and raised in the U.P. and has graduate degrees in creative writing from Brandeis, Virginia, and Western Michigan, and a degree in religious studies from Central Michigan. He is the author of U.P.: A Novel, several poetry chapbooks, and numerous plays, including Carol, Dandelion Cottage, A Play, and All Saints' Day.

Beautifully edited, The Way North is more than a collection. It is a collaboration of writers, each whom understand in his and her own way what is sacred about that utterly unique, freshwater peninsula known as the U.P. Open most any page of this book and you'll smell the piney air and feel even in the sunlight the clean, steely, visceral cold.

It's about time we had an anthology like this, news from the cold, winter world, a new kind of North. These are notifications that we are not alone up here-out there-in our snowy hearts' interiors.

The Way North is a wide-ranging sampler of current Upper Peninsula writing, reflecting many different viewpoints, and an excellent introduction for those who are curious about the UP and its writers.

This collection establishes beyond a doubt that Upper Michigan has incubated some of the most exciting, innovative, and downright enjoyable writers and writing being produced anywhere in America today. Ron Riekki-a terrific writer himself-deserves plaudits and more.

The Way North, edited by Ron Riekki, is a unique collection of stories and poems from Michigan's Upper Peninsula. . . this is a worthwhile read, especially for those with an interest in Michigan.

The Way North is a powerful and much recommended addition to the literary compilations focusing on the Midwest.

The Way North, a collection of poems and short stories gathered by editor Ron Riekki, deserves a place on everyone’s bookshelf. Riekki made his selection with one thought in mind— to show off the best contemporary pieces from authors associated with the Upper Peninsula of Michigan.

5 hours 27 min ago
Happy Pub Date! HOUSE AND HOME is a collection of poems that intensely explore the beauty & wisdom to be found in w… https://t.co/MYnkKJxcrx
2 days 7 hours ago
Join WSU President M. Roy Wilson for a book talk next Wednesday! Copies of his memoir will be available for sale a… https://t.co/6q5w5dtFtu
4 days 7 hours ago
TONIGHT! Join @stephanie_heit at @ShopBooksweet for local author's night! https://t.co/pTny5OErDe